Equinor and SSE have been awarded contracts to develop three offshore wind projects in the Dogger Bank region of North Sea, worth 3.6 GW.

UK authorities announced today, September 20, 2019, that Equinor and its partner SSE were awarded contracts to develop three large scale offshore wind projects in the Dogger Bank region of the North Sea. The portfolio for the three plants will be the world’s biggest offshore wind farm portfolio development with a total installed capacity of 3.6 GW.

The projects are expected to produce enough energy to power the equivalent of 4.5 million UK homes.

Dogger Bank, together with the recent award for Empire Wind in the US, positions Equinor as an offshore wind major. These projects provide economies of scale and synergies, making us an even stronger competitive force in offshore wind globally, said executive vice president for New Energy Solutions in Equinor, Pål Eitrheim.

“We expect the cost reductions obtained by the industry through continuous project execution and technological innovation will contribute to continued value enhancement.”

The Dogger Bank projects are estimated to trigger a total capital investment of approximately GBP 9 billion between 2020 and 2026. The joint venture will be seeking non-recourse project financing to fund the Dogger Bank development. A preliminary market sounding of potential lenders has demonstrated very strong interest for UK offshore wind assets. The partners are planning for final investment decision for the first project during 2020 and the first power generation is planned for 2023. Further phases of the Dogger Bank project will be developed thereafter. 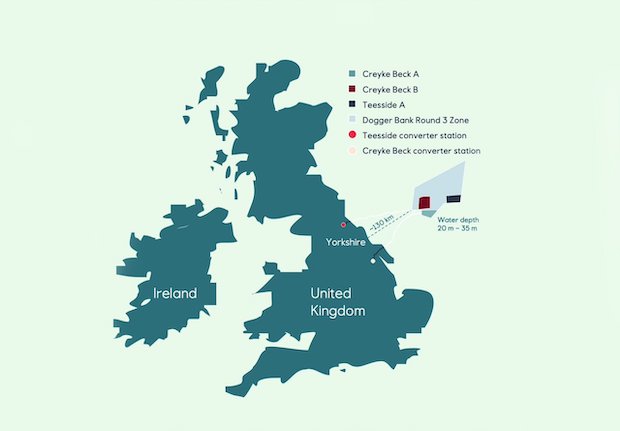 The awards were given under the Contracts for Difference (CfD) competitive auction held by National Grid on behalf of the UK’s Department for Business, Energy and Industrial Strategy (BEIS) which has successfully commissioned 6 GW of offshore wind to reach a target of 30 GW of offshore wind by 2030.

Each project will have an installed capacity of 1.2 GW. Together, they can cover approximately 5 percent of the UK’s estimated electricity generation. The first project is expected to be operational in 2023, and the lease is given for 50 years.