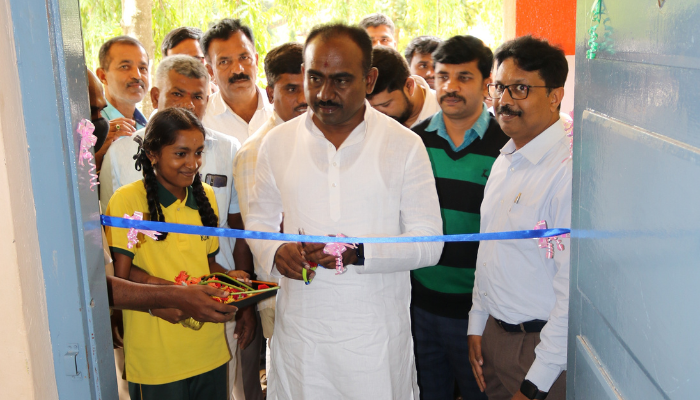 The commissioning of its first project with Trinity Care Foundation’s (TCF) Integrated School Educational Infrastructure Development Program (ISEIDP) has been announced by California-based microinverter manufacturer Enphase Energy. This program is a step by Enphase India in the direction of Corporate Social Responsibility (CSR). The pilot project was launched recently at Karnataka Public School in Kudur, Ramanagara District, Karnataka.

Provisions Under The CSR Activity

ISEIDP (Integrated School Educational Infrastructure Development Program ) is the first-of-its-kind initiative to power a school with renewable energy from rooftop solar PV systems. It will also upgrade the school curriculum with computer and robotic training by providing students access to computers, course materials, and trainers.

With the assistance of the government school administration and the Education Department, Enphase Energy will equip the upper primary classes with desktop computers. The projectors, at the same time, will be powered by a hybrid 4kv Rooftop Solar PV micro-inverter system. Lights, fans, and computer systems will function as usual during power loss or breakdown.

This robotics kit curriculum will offer year-long educational programs for classes 8 through 10, and will be utilised to teach thorough STEAM instruction on subjects like electronics, robotics, automation, the Internet of Things, coding, android app development, and much more. Building the capacity of the teachers through specialised training and one-on-one coaching/sessions is another important component of the ISEIDP effort.

Poor technical education drastically impacts a child’s academic performance from primary to upper secondary school and frequently causes high dropout rates in rural India. About 500–600 students will gain from this effort, which will encourage them to continue technical education.

Binu Varghese, Director Of CSR Non-Profit Consulting & Social Project Management, Trinity Care Foundation, has said that Enphase has put into place a dependable as well as secure system to make uninterrupted power a reality at government schools and also made education more accessible in the process.