Energy Storage Market Breaks Quarterly Deployment Record in the US

2,156 MWh of new energy storage systems were brought online in the US in Q4 2020, making it the new record quarter for US storage.

According to Wood Mackenzie and the US Energy Storage Association’s (ESA) latest ‘US Energy Storage Monitor’ report, 2,156 megawatt-hours (MWh) of new energy storage systems were brought online in Q4 2020. This is an increase of  182 percent from Q3 2020, making Q4 the new record quarter for US storage. 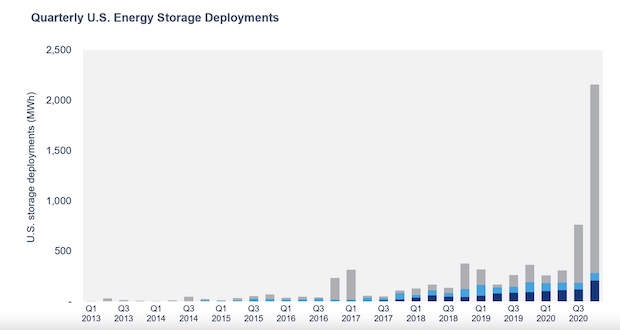 As prices fall and barriers to storage deployment are eroded, front-of-the-meter (FTM) storage is taking off in the US. Four out of every five megawatts (MW) deployed in Q4 were FTM storage. The segment contributed 529 MW out of the total 651 MW of storage deployed in Q4. California saw the lion’s share of Q4 FTM deployments, according to the report.

It states that at 90.1 MW deployed, residential storage projects made up 14 percent of the MW total for Q4. After gradual growth in deployments over the first three quarters of 2020, Q4 saw a notable residential spike, driven in large part by homeowner interest in California.

“2020 is the first year that advanced energy storage deployments surpassed gigawatt-scale – a tremendous milestone on the path to our aspiration of 100 GW by 2030,” said Jason Burwen, US Energy Storage Association Interim CEO. “With continuing storage cost declines and growing policy support and regulatory reform in states and the federal government, energy storage is on an accelerating trajectory to enable a resilient, decarbonised, and affordable electric grid for all.”

Massachusetts led the non-residential segment in Q4, which is growing more slowly than the other two U.S. storage segments and deployed 76.5 MWh during the quarter. California and Hawaii also saw several new projects come online.

“The data truly speaks for itself,” said Dan Finn-Foley, Wood Mackenzie Head of Energy Storage. “The US installed 3,115 MWh of storage from 2013 through 2019, a total that 2020 beat in a single year. This is the hallmark of a market beginning to accelerate exponentially, and momentum will only increase over the coming years. The new largest battery in the world, the 300 MW / 1,200 MWh system newly installed at Moss Landing, likely won’t hold the title for long.”

The report highlighted that Q4 was the most eye-catching quarter to date for the residential market. California contributed most residential storage deployments in 2020 and Hawaii was also a very active market, while states in the Northeast, the Midwest, the mid-Atlantic and the Southeast are forecast to see growth over the next few years.

Tags: energy storage, Energy Storage in US, market research, US, US Energy Storage Association, WoodMac
"Want to be featured here or have news to share? Write to info[at]saurenergy.com