EESL to set up Decentralised Solar Projects Worth 1.5 GW by 2021

EESL plans to set up 1.5 GW of decentralised solar power projects across the country by the end of 2020-21, its managing director, Saurabh Kumar has said. 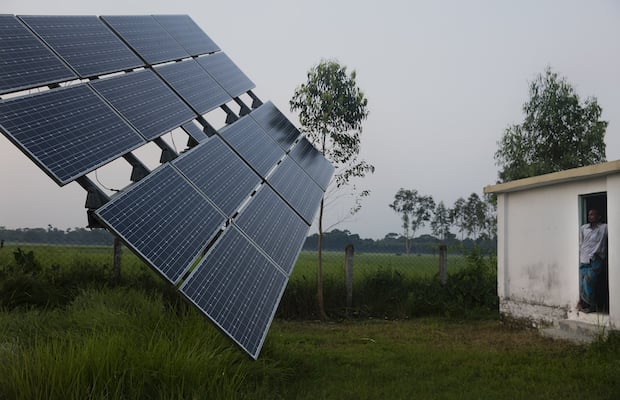 State-owned Energy Efficient Services Ltd (EESL) has forayed into solar power generation and plans to set up 1.5 GW of decentralised solar power plants across the country by the end of 2020-21, its managing director, Saurabh Kumar said. According to Kumar, the Maharashtra government had given a mandate for 800 MW of solar power, of which EESL has already operationalised 100 MW. Rajasthan has given EESL the mandate to set up 113 MW of solar distributed generation projects, he added.

In Maharashtra, EESL is supplying electricity at 3.10 per unit to agriculture feeders, with land for the project being provided by the state. In Rajasthan, the company will supply power at 3.90 per unit along with land acquisition cost, he said.

The company, however, will not set up solar capacity of more than 10 MW at one location, Kumar said, adding that the capacity of these solar power plants in each substation ranges from 0.5 MW to 10 MW.

According to Kumar, the decentralised solar plants will meet the requirements of farmers connected to the agriculture feeder. He said EESL has installed 1.1 million smart meters in New Delhi Municipal Corp area, Uttar Pradesh, Haryana and Bihar. EESL has set a target of installing 250 million smart meters over the next few years.

Recently, speaking at a function organised to mark 10 years of state-run Energy Efficiency Services Ltd (EESL) in Delhi, Power Minister RK Singh had said “Business model, that is what works. You can have subsidy models. I have found through experience that the subsidy model does not work as well as a business model. That is what EESL brought in energy efficiency. The business model made it possible to replace agriculture (water) pumps with energy-efficient pumps.” The minister had also announced the commissioning of 100 MW cumulative capacity decentralised solar power plants connected to agriculture feeders.

Prior to that, we had reported that EESL, which was established in 2009 to unlock the potential of energy efficiency, recently completed its 10 years. It’s implemented initiatives have cumulatively led to energy savings of more than 58 billion kWh and a reduction of more than 46 million tonnes of greenhouse gas (GHG) emissions across the globe. During its 10 years, the company had enjoyed exponential growth, with offices spread across India, UK, Middle East, South Asia and South-East Asia. And it has seen its revenue grow at a CAGR of 114.96 percent from Rs 26 crore in FY 2013-14 to Rs 2,565 crore in FY 2018-19.