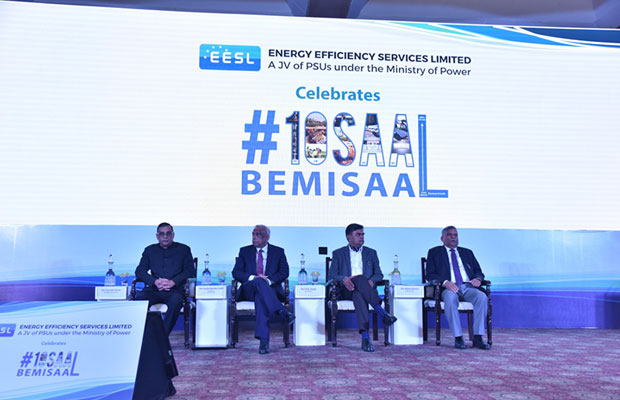 With its rapid growth, the company now aims to become Rs 10,000-crore company in next three years.

EESL was established in 2009 to unlock the potential of energy efficiency. It’s implemented initiatives have cumulatively led to energy savings of more than 58 billion kWh and a reduction of more than 46 million tonnes of greenhouse gas (GHG) emissions across the globe.

During its 10 years, the company had enjoyed an exponential growth, with offices spread across India, UK, Middle East, South Asia and South-East Asia.

On the occasion, the ceremonial event was organized by EESL which was graced by Power Minister R.K. Singh, Power Secretary Sanjiv Nandan Sahai, along with dignitaries from various ministries, state governments, multilateral bodies, industry and think tanks.

While speaking at the occasion, R.K. Singh said, “Energy efficiency and conservation have been central to India’s climate action. The scale and pace of our energy efficiency initiatives have been unprecedented, with an immense impact that has been acknowledged globally and the world is keen to replicate. I would like to congratulate EESL for their relentless efforts towards achieving the country’s energy efficiency goals and completing an exceptional decade of success. I look forward to many more years of EESL’s endeavours in catalysing innovative solutions for an energy future that is sustainable, accessible, and reliable.”

During the event, Singh announced the successful installation of 10 lakh smart meters across India, under the Government of India’s Smart Meter National Programme (SMNP). These smart meters, operational in Uttar Pradesh, Delhi, Haryana and Bihar, aim to bring efficiency in the distribution system leading to better service delivery.

Singh also announced the commissioning of 100 MW cumulative capacity decentralised solar power plants connected to agriculture feeders. The capacity of these solar power plants, in each substation, ranges from 0.5 MW to 10 MW. The decentralised solar plants cater to the requirements of farmers connected to the respective agriculture feeder daily, by means of reliable day time electricity.

He also launched the dashboards of Smart Meter National Programme (SMNP), National Electric Mobility Programme and solar initiatives to transparently monitor the real time progress of the programmes and its impact.

Power Minister also launched an integrated mobile application – EK EESL- where all the dashboards of all the programmes being implemented by EESL will be accessible and anyone can monitor their real-time progress. In the context of the National Electric Mobility Programme, he also highlighted that the electric vehicles deployed by EESL have completed 2 crores cumulative Kilometers.

EESL and Provincial Energy Authority, Ministry of Interior, Royal Thai Government exchanged a MoU during the event for long-term cooperation and collaboration to advance the implementation and deployment of energy efficiency measures at SMEs in Thailand.

EESL spearheaded and implemented the Government of India’s zero subsidy Unnat Jyoti by Affordable LEDs for All (UJALA) programme by distributing over 36.16 core LED bulbs and Street Lighting National Programme (SLNP) by retrofitting over 1.06 crore streetlights with LEDs.

Under the Buildings Energy Efficiency Programme (BEEP), EESL has completed projects in 10,344 buildings including Railway Stations and Airports. Implementing Agriculture Demand Side Management (AgDSM), EESL has installed over 73,800 no. of pumps in the state of Andhra Pradesh and Uttar Pradesh. Under the National Emobility Programme, till date, 1,510 e-cars have been deployed/under registration. For charging e-cars, 300 AC & 170 DC Captive chargers have also been commissioned and 68 public charging points are currently operational in Delhi NCR.