According to a new analysis, solar PV and onshore wind are now the cheapest sources of new-build generation for at least two-thirds of the global population.

The latest analysis by research company BloombergNEF (BNEF) shows that the global benchmark levelised cost of electricity, or LCOE, for onshore wind and utility-scale PV, has fallen 9 percent and 4 percent since the second half of 2019 – to USD 44 and USD 50/MWh, respectively. Meanwhile, the benchmark LCOE for battery storage has tumbled to USD 150/MWh, about half of what it was two years ago. Substantiating the claim that solar PV and onshore wind are now the cheapest sources of new-build generation for at least two-thirds of the global population. Those two-thirds live in locations that comprise 71 percent of gross domestic product and 85 percent of energy generation. Battery storage is now the cheapest new-build technology for peaking purposes (up to two-hours of discharge duration) in gas-importing regions, like Europe, China or Japan. 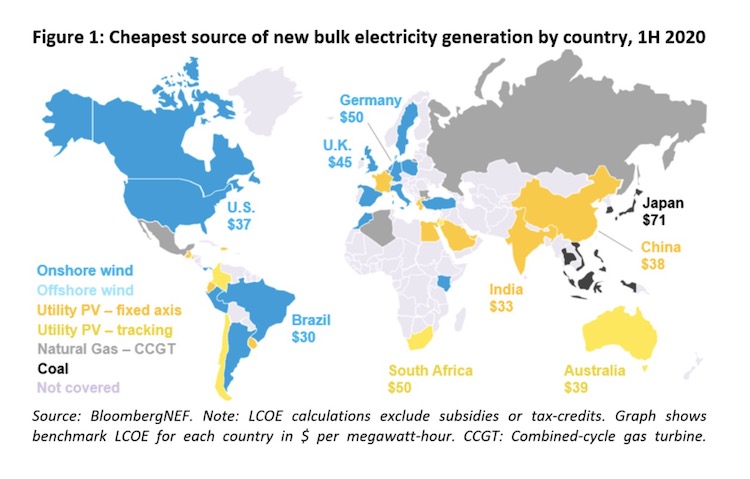 The analysis added that onshore wind has seen its most significant drop in cost since 2015. This is mainly due to a scale-up in turbine size, now averaging 4.1 megawatts, and priced at about USD 0.7 million per megawatt for recently financed projects. In Brazil for instance, where wind resources are ample, the economic crisis of 2016 onwards saw the cost of capital for wind projects increase by up to 13 percent. BNEF’s analysis suggests that lending rates more recently have fallen back to levels seen before that crisis. And this means that best-in-class onshore wind projects can achieve an LCOE of USD 24 per megawatt-hour, the lowest globally. Meanwhile, top projects in the U.S., India and Spain follow at USD 26, USD 29 and USD 29 per megawatt-hour respectively, excluding subsidies such as tax-credits.

In China, the largest PV market, the firm’s solar benchmark is at USD 38/MWh, down 9 percent from the second half of 2019, following a rapid uptake in better performing monocrystalline modules. New-build solar in the country is now almost on par with the running cost of coal-fired power plants, at an average of USD 35/MWh. This is significant as China advances on its deregulation agenda, opening up competition in the power sector, the analysis added.

Globally, the analysis estimates that some of the cheapest PV projects financed in the last six months will be able to achieve an LCOE of USD 23-29 per megawatt-hour, assuming competitive returns to their equity investors. Those projects can be found in Australia, China, Chile, and the U.A.E., where they will challenge the existing fleet of fossil fuel power plants.

Tifenn Brandily, lead author of the report at BNEF, said, “there have been dramatic improvements in the cost-competitiveness of solar and wind. Part of it is due to photovoltaic and wind technology getting better at extracting renewable resources. But our analysis also suggests that since 2016, auctions are forcing developers to realize cost savings by scaling up project size and portfolios. Larger scale enables them to slash balance-of-plant, operations and maintenance expenses – and have a stronger negotiating position when ordering equipment.”

Energy Efficiency and RE Drove Decade of US Energy Transition: BNEF
Also Read

Globally, BNEF estimates that the average onshore wind farm has doubled its capacity from 32 megawatts in 2016 to about 73 megawatts today. Solar farms are a third more powerful today, at 27 megawatts on average, compared to 2016. 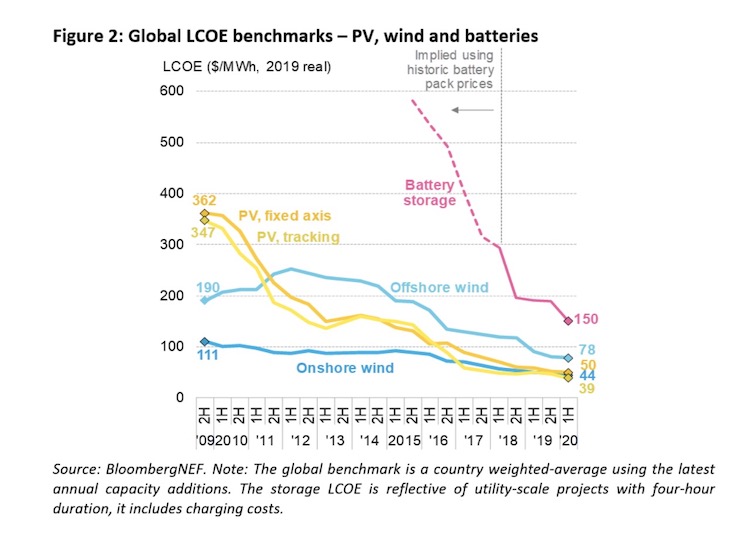 Battery storage is another example of how scale can unlock cost reductions. BNEF estimates that the average capacity of storage projects sits at about 30 megawatt-hours, a fourfold rise compared to just seven megawatt-hours per project four years ago. Since 2018, increasing project sizes combined with a rapidly expanding manufacturing base and more energy dense chemistries, have halved the LCOE of energy storage. BNEF’s global LCOE benchmark sits now at USD 150/MWh for battery storage systems with a four-hour duration.

China is home to the cheapest storage levelised costs globally, at USD 115 per megawatt-hour. This competitive advantage hinges mainly on the proximity of developers to the equipment supply chain and the more widespread use of cheaper LFP (lithium iron phosphate) chemistries. In comparison, the levelised cost of open-cycle gas turbines per megawatt-hour sits today between USD 99 in the U.S. and USD 235 in Japan, with China at USD 145.