Could KUSUM Deliver Crucial GW’s to Solar Target for 2022

India’s solar capacity target of 100 GW installations by 2022, which has been hit by multiple blows due to payments, policy, legal and finally the covid hurdle, has been up for speculation for some time now. While some of us observers have been predicting a miss since 2019, others have become more insistent about it since 2020. During all this, the government, especially Power Minister R.K. Singh has manfully insisted that the target will be met.

By August this year, it appears the country has managed to reach 44 GW of solar capacity. With 16 months to go for the 2022 deadline, what are the chances of reaching the 100 GW target? Despite a strong pipeline of projects under implementation, a pickup in pace of tenders, it does look like we will end up with a figure close to 100 GW in terms of projects completed or under installation. That last word needs some expansion, to mean projects that will probably be completed well into 2023 , or even beyond.

For now, these numbers are build around an overwhelming share of utility solar projects, at close to 85% possibly by 2022. Except for one big chance. Projects under the PMKUSUM scheme, which notionally has a solar target of 30.8 GW by 2022. For long seen as an ambitious policy driven initiative that seeks to use solar power to solve multiple challenges, the least of which was better incomes for farmers and converting the agriculture power economy to a green economy, the PMKUSUM scheme, after several false starts, is finally picking up some momentum. Earlier in February this year, the Power Minister had informed about 4789 MW of projects under PMKUSUM being sanctioned. Those sanctions seem to be moving ahead finally. A simple search for the term ‘Kusum’ on this site will demonstrate that activity has indeed picked up strongly in recent months.

Projects under its Component A, or ground mounted solar plants in rural areas with capacities between 0.5 MW to 2 MW have finally started seeing some serious numbers. 7 states have bid out for capacity worth 2.7 GW in this year. Add to that 725 MW from last year, and you have 3.4 GW in the pipeline with a short deadline. The states, namely Madhya Pradesh, Maharashtra, Odisha, Uttar Pradesh, Tamil Nadu, Rajasthan, and Jharkhand should all be done with the process before year end, leaving developers with the 12 months typically available for commissioning these projects. This 3.4 GW has a high chance of being commissioned by 2022 end or a little later, owing to the smaller size of the projects. 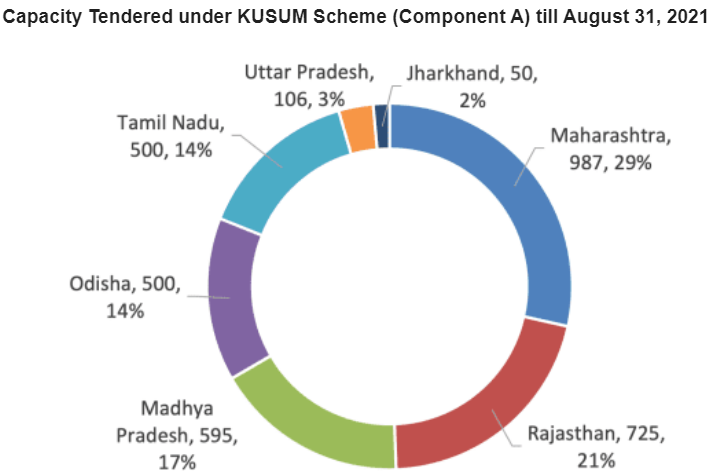 In fact, actual construction time seen here has been less than 3 months, with actual time being spent on issues linked to the inexperience of farmer/farmer organisations with the process and technicalities, financing and the low ceiling tariffs of Rs 3.14 /unit or lower, that keeps many developers away. A similar push to component C, which is about grid connected solar pumps with an option to sell surplus power to the grid could also be a great help, though again expectations there have to be tempered with constraints on supply side. With a DCR (Domestic Component Requirement) regime in full force for these projects, availability of materials has been cited repeatedly by developers as a key issue till now.

But between KUSUM and a stronger performance in rooftop solar category, that was originally planned to deliver close to 40 GW of the target, yet stands at just around 7 GW currently, there is hope that India will still get closer to 80 % of its target, than the 65 to 70% that seemed likely till a few months back. With actual 100 GW capacity achieved by early 2024 at best.

With New Target Of 30.8 GW by 2022, Changes In KUSUM Scheme Follow
Also Read
Tags: Component - A, PMKUSUM, Power Minister, projects under construction, R.K Singh, solar targets, target achievement by 2022
"Want to be featured here or have news to share? Write to info[at]saurenergy.com