A new report has revealed that climate financing by the world’s largest MDBs in developing economies rose to an all-time high of $43.1 billion in 2018 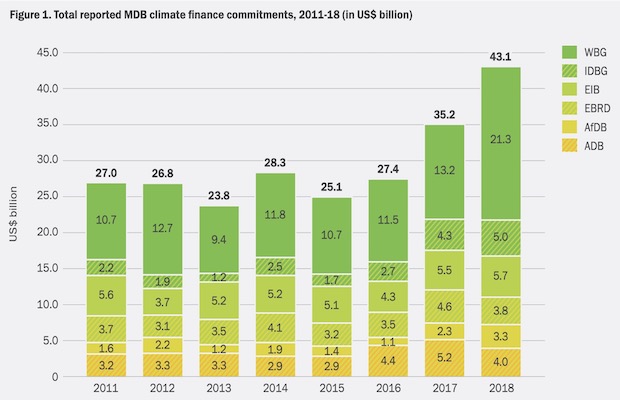 A new report has revealed that the climate financing by the world’s largest multilateral development banks (MDBs) in developing countries and emerging economies rose to an all-time high of $43.1 billion in 2018, boosting projects that help developing countries cut emissions and address climate risks.

The latest findings indicate an increase of more than 22 percent from the previous year, where climate finance totalled $35.2 billion. There is also a 60 percent increase since the adoption of the Paris agreement in 2015 response to the ever more pressing challenge of climate change, which disproportionately affects the poorest and most vulnerable.

“The MDBs are key partners in drawing more private sector investors and large institutional investors into the green finance sector,” said Josué Tanaka, the EBRD’s Managing Director for Energy Efficiency and Climate Change. “Green finance is central to what we do at the EBRD. We are well on the way to achieving our goal of 40 percent of EBRD investments being in the green sector by 2020, as well as mobilising significant amounts of private sector finance to complement our own investments in line with our philosophy of working with the private sector.”

The report shows that $30.2 billion, or 70 percent, of the total financing for 2018 was devoted to climate change mitigation investments that aim to reduce harmful greenhouse gas emissions and slow down global warming. The remaining $12.9 billion, or 30 percent, was invested in adaptation efforts to help address mounting impacts of climate change, including worsening droughts and more extreme weather events from extreme flooding to rising sea levels.

Since 2011, when the six MDBs initiated joint reporting, they have committed nearly $237 billion in climate finance for developing and emerging economies. Climate funds channelled to these countries through MDBs, such as the Climate Investment Funds (CIF), the Global Environment Facility (GEF) Trust Fund, the Global Energy Efficiency and Renewable Energy Fund (GEEREF), the European Union’s funds for Climate Action, and the Green Climate Fund (GCF), play an important role in boosting MDB climate financing.

In addition, as well as the $43.1 billion of MDB finance in 2018, MDBs report another $68.1 billion in net climate co-finance – investments from the public and private sector – adding up to total climate finance for the year of $111.2 billion.