Moreover, the Gram Panchayath is estimated to save up to Rs 58,000 per year as this solar plant will approximately generate 29,000 kWh electricity units per annum for next 25 years. 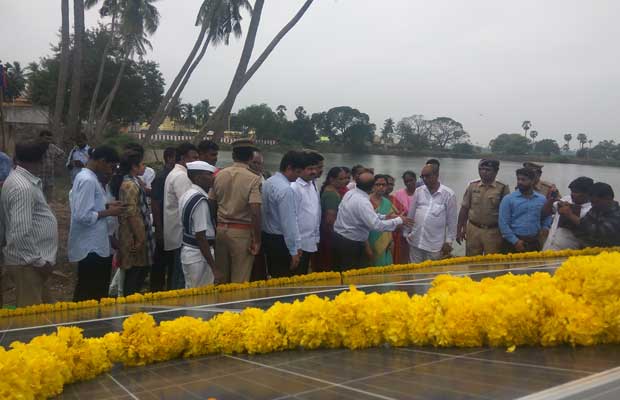 Country’s one of the leading rooftop solar developer CleanMax Solar has donated 20 kWp solar plant to the Gram Panchayath of Komaravolu village in Andhra Pradesh (AP).

The plant was inaugurated on October 10, 2018 by Nara Bhuvaneswari, wife of Chief Minister of Andhra Pradesh, N Chandrababu Naidu, Tejus AV, Head – Solar Farms for CleanMax Solar, was also present on this occasion.

Further, the Komaravolu village was adopted by Nara Bhuvaneswari under the “Smart Village Smart Ward programme” to develop it into a model village.

With this installation, this village has taken a step closer towards energy security and environment preservation by adopting solar energy.

Moreover, the Gram Panchayath is estimated to save up to Rs 58,000 per year as this solar plant will approximately generate 29,000 kWh electricity units per annum for next 25 years.

The project will meet 36 percent of the gram panchayath’s electricity requirement through solar power.

Commenting on the occasion, CleanMax Solar, Co-founder, Andrew Hines said, “The ‘Smart Village Smart Ward programme’ by the Andhra Pradesh Government is a laudable initiative to promote solar electricity in villages. While much attention is paid to large scale solar projects, village-level projects like this one will help to improve energy availability in villages, where this problem is more acute. CleanMax Solar is glad to be a part of this program and to contribute towards development of Komaravolu village by helping the Gram Panchayat become self-sustainable for their electricity requirements. We hope that such an initiative will set an example for other villages to turn towards sustainable forms of power generation.”