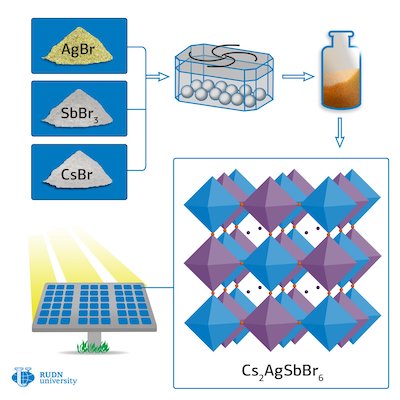 A chemist from RUDN University has synthesised new types of optically active materials with the structure of the mineral perovskite. Proposing an environmentally friendly, fast and easily reproducible mechanochemical method, which allows obtaining hybrid materials of high purity, promising for the creation of solar cells.

In the article published in the journal Nanoscale.  The research reveals that the vast majority of organo-inorganic hybrid materials used today in solar power are three-dimensional perovskite-like semiconductors that contain lead in their structure. However, the use of such materials creates problems due to their toxicity. Double perovskites, or “elpasolites,” can serve as a convenient alternative that would help avoid using toxic lead.

To date, many of the theoretically predicted structures of double perovskites have not been synthesised due to a number of problems, such as the formation of stable by-products, for example, cesium, bromine, and antimony compounds, which prevented the reaction from being completed. Rafael Luque, the Director of the scientific center at the Joint Institute for Chemical Research of RUDN University, and his colleagues used the methods of “green chemistry” to synthesise three double perovskites: Cs2AgBiBr6, MA2TlBiBr6, and Cs2AgSbBr6.

The chemists used the mechanochemical approach, that is, high-energy grinding, which does not require the use of organic solvents, and therefore is more environmentally friendly. The authors of the article demonstrated that low temperature is a critical parameter in the process of synthesis in a ball mill because it eliminates the formation of side compounds.

The research also revealed that the structure and the phase and elemental composition of the obtained perovskites were confirmed by physicochemical analysis methods. Thermal stability was also evaluated. It was shown that the synthesised materials are stable at high temperatures, from 300 to 500 degrees Celsius.

To check the optical properties of the synthesised hybrid materials, the chemists measured the absorption and emissive power of new materials in the visible and ultraviolet range. Based on these data, the researchers calculated the band gap, that is, the range of energies which makes it possible to determine the electrical conductivity of a material, in particular, if the material is a semiconductor. The obtained energy values, i.e. the band gap, are in complete agreement with both the theoretically calculated values and with the experimental ones, described in the literature for the corresponding structures.

The new materials demonstrate high stability; no changes were observed in their crystalline structure after several months of storage at room temperature and ambient humidity. Professor Luque and his colleagues believe that their method can be used to synthesise other double perovskites, which are prone to decomposition into layered phases that could become the basis for the creation of highly effective photovoltaic cells free of toxic lead.

The synthesised materials are highly efficient, comparable to most synthesised literature systems but synthesised in a much easier and environmentally friendly way that will significantly reduce product costs in the final material. The future will tell about their economic feasibility but the materials have indeed promising prospects for various applications,” Luque says.