Central Electricity Regulatory Commission (CERC) has extended the validity period of RECs which were due to expire between April 1, 2019, and October 31, 2019. 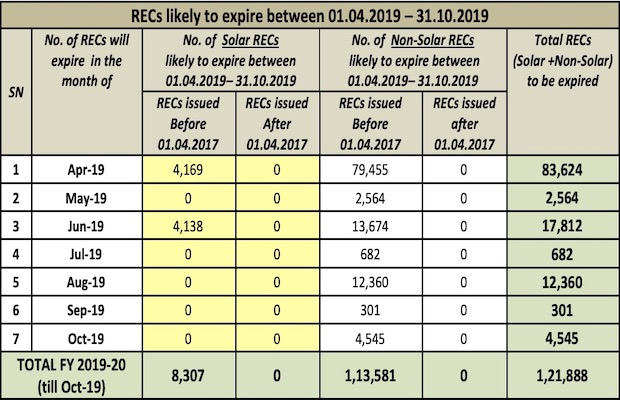 The Central Electricity Regulatory Commission (CERC) has, in a big move for the renewable energy generators of solar and non-solar projects in the country who are involved in the trading of the Renewable Energy Certificates (REC), extended the validity period of such certificates which were due to expire between April 1, 2019, and October 31, 2019.

The commission’s decision to extend the validity of the RECs will provide the sellers with eight REC trading sessions to finish the entire inventory. A strong move, as buyers are showing a greater interest in purchasing RECs issued before April 1, 2017, as their prices seem attractive. All non-solar RECs have been trading at a price near Rs 1,500/REC while all solar RECs have been trading around Rs 2,000/REC.

Recently, we reported that the sales of renewable energy certificates have dropped by about 65 percent to 3.68 lakh units in April as compared to 10.62 lakh in the same month last year due to lower supply, according to data released by the Indian Energy Exchange (IEX) and Power Exchange of India (PXIL).

IEX saw total trade of 2.24 lakh in April, less than a third of what it managed in the same month last year with the sale of 7.81 lakh certificates. And, PXIL recorded sale of 1.44 lakh RECs in the month compared to 2.81 lakh a year ago.