Borosil Renewables Q1 Results. Some Speed Bumps, But A Long Clear Road Ahead

Continuing its smart turnaround on the back of high solar glass prices, Mumbai-based solar glass manufacturer Borosil Renewables has reported a net profit of Rs 39.62 crore in Q1 FY22 as against a net loss of Rs 1.87 crore in Q1 FY21. The stunning results follow from a 151.8% YoY increase in net sales to Rs 136.13 crore in the quarter ended June 2021. The big question is, how long can the firm sustain this change in fortunes?

Lower Than Q4, Mostly Due to Covid 2nd Wave

Even As Solar Glass Prices Retreat, Price Pressures To Continue On Modules in 2021
Also Read

The firm’s board also approved a proposal to increase the production capacity of the company’s upcoming third furnace (SG-3), which is being installed at its manufacturing facility at Bharuch, Gujarat, from 500 MT per day to 550 MT per day, increasing the project’s estimated cost to Rs 600 crore from Rs 518 crore. The furnace is expected to be commissioned by July 2022.

At the Borosil Renewables Q1 FY2022 investor call held on August 5, 2021, the company’s Executive Chairman P.K. Kheruka blamed the pandemic among other issues for the quarter on quarter slump, saying that sales volume was lower than the historical peak volumes achieved during Q4 FY21 by about 10% due to lower production and high costs .

On the input costs front, Kheruka noted that there been a rise in the costs for natural gas, packing materials and a few raw materials. The company is putting in efforts to minimise the impact. Both these are likely to impact the EBITDA margins in the current quarter, he said.

There is a new challenge posed by imports coming from the new solar glass plant in Vietnam set up by one of the large Chinese companies, which has begun operations recently. Such imports are not subjected to any duties as of now. Initially, these imports were priced higher taking into account the duties on alternate sources. However, the offer prices have now aligned to China/Malaysia.

Kheruka said that the company is closely watching the situation and will take appropriate measures available under the law. While Borosil awaits levy of basic custom duty on solar cells and modules becoming effective from April 1, 2022, the safeguard duty of 14.5% has come to an end of July 30, 2021. This may result in an increase in imports and pose a temporary challenge for domestic producers of modules.

The company’s board has approved a further expansion by 1000 tonnes per day to be implemented in 2 phases of 500 tonnes per day each. These will be their lines SG4 and SG5. The work on SG4 is likely to be taken up during the second half of this financial year and the line is expected to be commissioned in quarter one financial year 2024.

On the question of production costs, Ashok Jain, Director, Borosil Renewables, stated that the price of energy is running high for all glass manufacturers. The imported LNG or spot LNG is only a part of the company’s total basket of sources for natural gas.

He explained, “We have a couple of contracts where these import prices do not affect as much. We balance various types of sources and try to minimize the impact and the volatility… [But for] the LNG portion, which we buy directly on spot quantity basis, [and] which is about 10% to 12% of our requirement, the cost has been running very high. In terms of the other contracts, which we link to oil again, the cost is high, which is another 15% to 20%. Almost one-third of our natural gas is aligned to the volatility in the oil and gas prices. This is impacting our energy costs and we do not see it correcting in the immediate future.”

At present, the company has a market share of about 36-37% and is already competing with the world’s largest producers located in China and Malaysia, who receive subsidies and other benefits, said the management. The added that while in general, the company exports 16-18% of its production, in the last quarter, this figure was close to 22-23%.

“Similar to the “AtmaNirbhar Bharat” Program running in India, there are programs running in Europe and USA also where they want to incentivize domestic production of modules instead of importing everything from China, Malaysia, Taiwan and other places. So, with a lot of growth in those markets in terms of the module manufacturing, which also means there is a lot of growth likely to happen in the demand for solar glass we have already started our outreach in those markets. We have in fact started commercial supplies to many large players who are setting up plants and we see that as a future potential for the company,” said Jain on the company’s growth prospects.

Borosil claims that it has been providing an increased focus on exports to all the markets including Russia, Middle East, Africa North and South America in addition to the regular markets in EU and Turkey. The demand for glasses in all the major markets is expected to rise exponentially due to increased thrust on domestic manufacturing of solar modules. 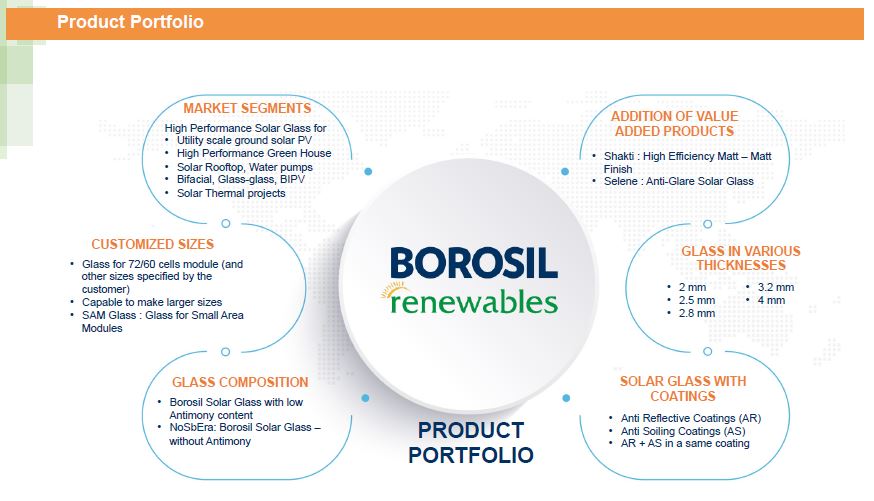 With solar glass prices coming off their June peaks, the sector could be set for a period of profitable growth at lower margins than those seen in Q3 and Q4 of 2020-21. A possibly larger than planned capex program is also likely to keep profits under a little more pressure, but there is no doubt that Borosil Renewables is very well placed to capitalise on the solar expansion underway. The firm should also benefit from the increased focus on Bifacial modules, which use more glass than the usual modules.

The firm was also in the news early during the second wave, when Kheruka  announced a generous support and compensation plan for the family of any employee of the firm that succumbed to the disease. The gesture was a trendsetter of sorts, and was followed by many firms across sectors.