Beyond Net Zero at 2070. PM Modi Makes Key Promises For India At COP26

Prime Minister Narendra Modi, in his speech at the COP26 Glasgow on November 1, did make a concession to activists demanding a net zero target from India. 2070. If that seems underwhelming (China has a commitment of net zero by 2060), then you might miss the really important part of his promises. 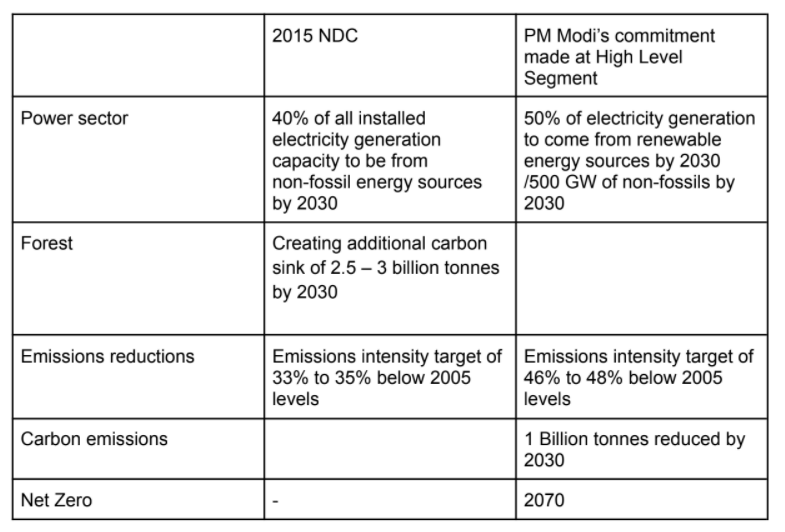 Keeping it Real-India’s Promises at COP26.

The 500 GW non-fossil commitment, effectively indicates total share of non fossil energy capacity at close to 60 percent by 2030. That in turn might finally indicate that the country has made peace with it’s destiny with coal, and will hit peak coal much earlier than many may have believed just a month ago, when the power ‘crisis‘ loomed.  Counter-intuitively, that might actually mean good news for some existing thermal plants, as they are used to tide over temporary disruptions as we saw in September-October. The right technology disruptions in generation, be it in nuclear, Solar or Hydrogen manufacturing, have the potential to allow India to move much faster, thanks to the stronger industrial base the country has to take advantage of such changes. It is up to the developed world to ensure the diffusion of such knowledge and support happens, to allow developing countries to do more.

Other key commitments from Mr Narendra Modi have been hailed as more substantive and relevant than just a net zero commitment for the distant future, by multiple experts and activists. Dr Ajay Mathur, Director General, International Solar Alliance says that “PM Narendra Modi cut through the rhetoric and delivered a big promise of climate action from India. Reducing 1billion tonnes of emissions by 2030 and expanding non-fossils capacity to 500 GW are enormous and transformative steps. 50% of electricity generation from renewable energy sources speaks to India’s leadership and commitment to climate action.”

Arunabha Ghosh, CEO, Council for Energy, Environment and Water – CEEW “India has clearly put the ball in the court of the developed world. This is real climate action. Now India demands US$ 1 trillion in climate finance as soon as possible, and will monitor not just climate action but also climate finance. Most importantly, India has called once again for a change in lifestyle. If we cannot fix how we live, we can’t fix how we live on this planet.”

He makes a very good point, as it has been finance, or the lack of it, that has actually prevented India from doing much more, much faster. Be it reform of its power distribution network, or pushing rooftop solar more aggressively, funding constraints have been  the main crimp in pushing the country faster towards its goals. Managing what it has, even while squeezing eye-watering amounts of taxes from fuel taxes, has been a brave some would say, and toughest political decision of Narendra Modi’s second tenure.

Dr Navroz Dubash, Professor, Centre for Policy Research “The overseas media will focus on India’s net zero by 2070 statement. But while it may mean something diplomatically – the last major economy in the bag – it will not be what drives change in India. Much more Intriguing are the announcements on railways, on non fossil capacity and the benchmark for renewable energy. These are what give scope for India to drive a low carbon development transition in the next decade.”

On 1 billion tonnes of Carbon emission reduction R R Rashmi, Distinguished Fellow, TERI adds that “1 billion tonne of reduction in absolute terms is massive. Compare this with the entire GHG inventory which is less than 3 billion tonne today, and will be 4.5 billion tonne in 2030. Committing to 1 billion is 25% of the inventory in 2030. This shows a tremendous leadership gesture and commitment to act now and fix the road to 2030. It also sets the stage for carbon markets. In a way this means absolute emission reductions and this also means that India has set itself to commit to a peak in emissions without saying so explicitly.”

Vibhuti Garg, Energy Economist and India lead, IEEFA explains it further. “India has pledged to increase the share of electricity generation from renewable energy sources to 50% by 2030. This would also reduce the emissions intensity of the economy by at least 45% from its 2005 levels. India is leading on climate action, it is doing more than its fair share. And has now also committed to reaching net zero emissions by 2070. “India is rightly asking for climate justice and asking developed nations to fulfill their promise of providing tech transfer and finance. In the past, developed nations have failed to fulfill their promise. India wants that expectation of such pledges should be based on principles of equity and common but differentiated responsibility, where the burden of accelerating the energy transition should fall more on the developed world in terms of timeline and that they should also facilitate tech transfer and finance.”

Ashish Fernandes, CEO, Climate Risk Horizons says that “Given the changed economics of the energy sector, with renewables and battery storage now cheaper than new coal, India was well positioned to commit to No New Coal and a coal peak. The fact that it didn’t is worrying and a huge missed opportunity. What’s the plan to stop growing our coal and oil emissions specifically and start phasing down? India cannotafford, for both financial and ecological reasons, to continue expanding its coal sector. There are 26 GW of new coal plants in the permitting pipeline. Building these would be a disaster for the climate and lock the Indian economy into expensive electricity.” He makes a good point, and one hopes clarity will follow soon, especially on the planned coal pipeline beyond 2023.

Dr Vaibhav Chaturvedi, Fellow, Council on Energy, Environment and Water (CEEW) “India’s announcement to turn net-zero is much more ambitious than that of China or the European Union.”

India’s targets, when seen in the context of all that needs to be achieved in just this decade to 2030, are truly ambitious, if one is familiar with the challenges decision making faces both in government and outside. We truly believe that these targets are welcome, and actually ‘stretch’ targets, considering our stage of development and energy consumption on a per capita basis. It is time for the developed world to step up, and allow the majority of the global population that resides in India and other developing countries, the space to breathe, grow and do what need to do to prevent the environmental disasters that we have at our doorsteps.

Tube Investments to form Subsidiary to Increase Focus on ...