Azelio’s verification project in Morocco has been completed and the first electricity has been produced according to plan. 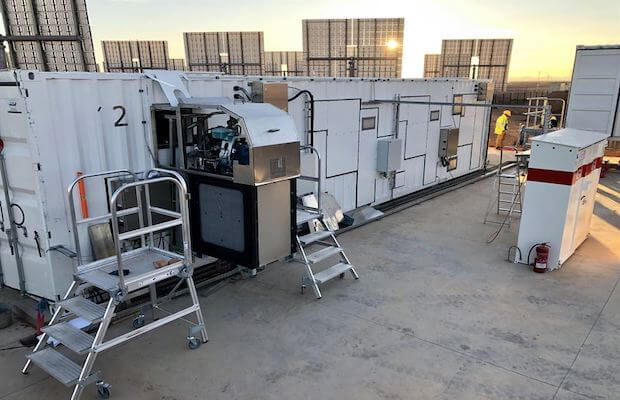 Azelio’s verification project in Morocco has been completed and the first electricity has been produced according to plan: that is, by the end of the year. The verification of Azelio’s solution for the storage and production of sustainable electricity on demand around the clock is a significant step in the industrialisation of the company.

During the fourth quarter of 2019, the company has prepared its verification project with its strategic partner, the state-owned Moroccan Agency for Sustainable Energy, Masen, at Ouarzazate Solar Power Station (also known as Noor Power Station) in Morocco, one of the world’s biggest. Since two modules comprising Azelio’s energy-storage solution were deployed in early December, further installations have been carried out. The first electricity from the energy-storage has been produced, whereby the firm fulfils its goal of producing electricity before the end of the year.

Today there are two modules on the site, consisting of energy-storage units as well as units designed to convert stored heat to electricity which is then used to boost the thermal energy storage. The modules also comprise a Stirling engine that converts the heat energy stored to sustainable and dispatchable electricity around the clock. The storage units will be charged with the help of electricity generated by 1000 square metres of solar panels.

The aim of the verification project is to generate data showing the technology’s performance levels in a real-world environment over the coming months. This means that the technology will become bankable since its customers will be able to use this data to seek funding for projects involving Azelio‘s technology.

Azelio CEO Jonas Eklind said “this has been an eventful year for Azelio, which we are now ending successfully with the delivery of the first electricity produced during our verification project in Morocco. We have now laid the foundations for the industrialisation of our technology, and I look forward to starting to turn the great interest shown in Azelio’s solution into actual orders next year.”

Earlier, the firm had announced that the rights issue for which the subscription period ended on December 23, 2019, was oversubscribed. The company will thus receive approximately SEK 350 million before deduction of transaction costs. The funds will finance the company’s ongoing operations and the commercialization of its thermal energy storage technology and Stirling-based sustainable electricity generation.