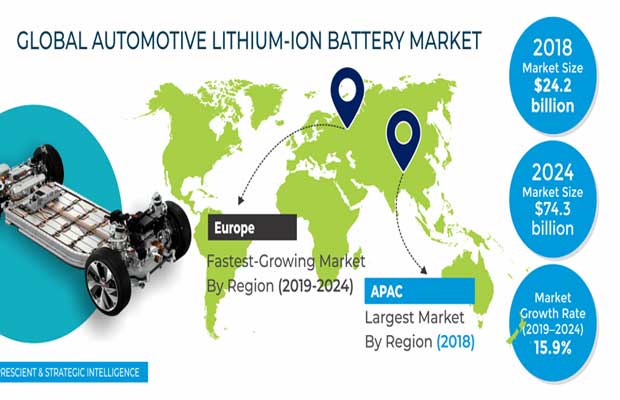 The report further added that, historically, the industry witnessed fastest growth in passenger car segment, mainly driven by rise in sales of electric cars (e-cars) across the world along with increased government push in various countries in the form of subsidies and monetary incentives for adoption of e-cars.

The report further observed the key trend in the automotive lithium-ion battery market as NMC batteries usage was growing in e-cars for rising effectiveness. The reason behind this is significant decline in NMC battery prices in recent years.

Moreover, the demand for higher range per charge is growing, and these batteries offer a greater energy density and thus offer higher vehicle range, it added.

According to P&S Intelligence, people preference is shifting towards using more alternative energy vehicles, especially electric vehicles (EVs), on the back of fluctuating fuel prices and concern over environmental protection due to rising pollution levels from conventional vehicles.

The demand was further supported by sharp reduction in lithium-ion battery components’ prices.

Besides, the fastest growth was witnessed by automotive lithium-ion battery with cylindrical cells, said the report. Its demand was driven by high mechanical efficiency and greater heat dissipation properties of these cells and their lower cost of production.

Also, a number of manufacturers are now focusing on using these cells in battery packs in order to manufacture their EVs.

Currently in the global market, most of the leading players of automotive lithium-ion battery are present in the APAC region, especially in China, Japan, and South Korea, the report further mentioned.