At the much more low key SNEC Shanghai 2020 this year, a light global presence has not deterred China based majors from rolling out their best offerings. Among others, it was interesting to see firms offer up BIPV (Building Integrated Photo Voltaic) options, in anticipation of an expected boom in this segment.

In China for example, China’s National Bureau of Statistics and the Chinese Academy of Building Research estimates that the country’s existing building area at present is about 80 billion square metres; at the same time, with close to 100 million square metres of roof area exposed to sunlight are added to the market every year. That makes BIPV a massive opportunity as adoption picks up. 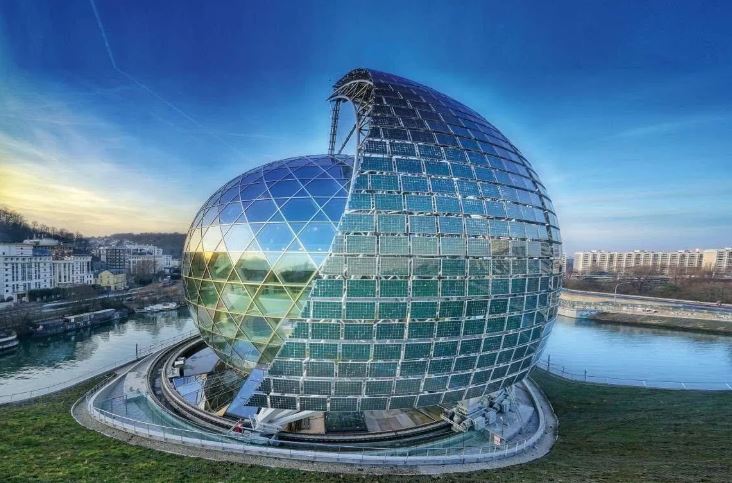 La Seine Musicale in Paris.One of The Most Iconic Uses of BIPV Systems

Leading firms like LONGi Solar, JinkoSolar, Talesun and Arctech  Solar launched BIPV products at SNEC 2020. JinkoSolar showcased a  coloured BIPV curtain wall made up of five colouring schemes, namely black, blue, purple, red and green, to offer a broader aesthetic for BIPV, that should help designers use it more.

Longi on the other hand launched its first pre-fabricated BIPV product from a brand new line, formally marking the company’s entry into the integrated BIPV market.

Much like Solar power itself in 2015, BIPV faced the same challenge till recently. A challenge of high cost, low output, and missing regulation. However, with virtually all three gradually falling into place over the past few years, especially across North America Europe, and now China, the BIPV segment is finally a hot segment. Larger, sturdier solar panels offering higher output, that have been hitting the market this year, have only added to the possibilities here. BIPV systems compensate for other limitations of utility solar, by using existing building infrastucture (no land requirement), being able to produce even facing multiple directions (all round the building), and now with bifacials, even using internal light to produce some power. They can even compensate for the high initial cost through savings in building materials required for a BIPV roof for instance, or by providing better thermal insulation.

That explains firms like Arctech Solar launching upgraded versions of their BIPV solutions, in this case by conforming to conventional building standards, such as anti-leakage, anti-sedimentation, anti-expansion. Meanwhile, by applying water guide, the firm claims that the upgraded Smart Rooftop II BIPV systematically improves waterproofing and overall product performance. The firm claims the new system is already being applied at projects like the largest BIPV project in China, the 40.9 MW Fengcheng project.

So what about India? It’s no secret that cost and regulation are both massive issues here. While a high cost of industrial power actually tackles the cost issue somewhat, regulations remain a stumbling block. OR more simply, open access regulations. By far the most critical step to ensure wider adoption of BIPV by firms, India’s open access regulations remains a maze of rules, regulations and interpretations that can change from state to state. Take this very recent case involving a blue chip corporate, ITC Limited. The firm wanted to utilise power from its 46 MW wind farm in Anantapur , Andhra Pradesh, for its facilities across India, including in West Bengal. The firm claims in a case before the WBERC (West bengal Electricity Regulatory Commission) that it wrote multiple times to the state nodal agency for STOA (Short term Open access) for permission, but got no response. All this while, it was forced to use power at a higher cost from the local discom, CESC, in this case. Incredibly, beyond the year long plus delay, it took escalation to the state regulator  to discover that the STOA agency and the discom in this case expect the other one to take the onus of taking such applications ahead. details in the link. The point is, discoms remain stubbornly opposed to allowing their prime customers, especially in rooftop solar, from shifting. The same story has been repeated in states like Haryana or even Gujarat, where rules have either been changed arbitrarily, or a condition like getting an NOC from the local discom stymies many such plans.

The entry of the largest manufacturers presages a further price drop here, and for India, which has slipped up badly on its rooftop target of 40 GW, BIPV offers the best possible chance to catch up eventually, as utility solar runs its course, especially plain vanilla solar plants without storage.