Argentina has become the 72nd country to sign the Framework Agreement of the International Solar Alliance (ISA). 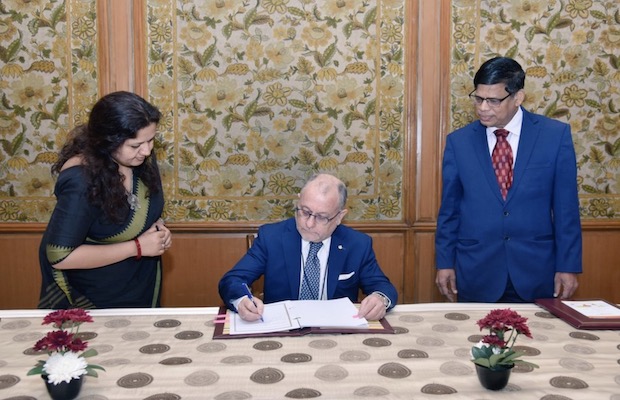 The agreement was inked on the sidelines of the official three-day visit of Argentinian President Mauricio Macri to India by Argentina’s Foreign Minister Jorge Faurie in the presence of ISA’s Director-General Upendra Tripathy.

Countries which have signed the agreement until now include India, France, Australia, UAE, UK, Japan amongst others. The agreement was opened for signature during the COP22 at Marrakech on November 15, 2016.

The International Solar Alliance (ISA) is a group of 121 solar resource-rich countries with headquarters in Gurugram, India. The organisation aims to deploy over 1,000 gigawatts of solar energy and mobilise more than USD 1,000 billion into solar power by 2030, according to the United Nations Framework Convention on Climate Change (UNFCCC).

In November 2018, the Union Cabinet gave ex-post facto approval for India moving a resolution for opening up of International Solar Alliance (ISA) membership to all UN countries. Opening the membership of the ISA will put solar energy in global agenda with the universal appeal for developing and deploying solar energy.

“It will make ISA inclusive, whereby all member countries that are members of the United Nations could become members. Expanding membership will lead to ISA initiative benefitting the world at large,” a statement added.

In December 2018, the ISA and the European Union signed an agreement to enhance solar energy on the sidelines of the Conference of the Parties to the United Nations Framework Convention on Climate Change.

“Joining efforts with the International Solar Alliance will reinforce the EU’s position as a global leader in the clean energy transition. It will help us fulfill our reduction of greenhouse gas emissions objectives and implement the Paris Agreement,” EU commissioner Miguel Arias Canete said at the time.