Apple backed China Clean Energy Fund has invested in three wind energy farms in the country with a combined capacity of 134 MW. 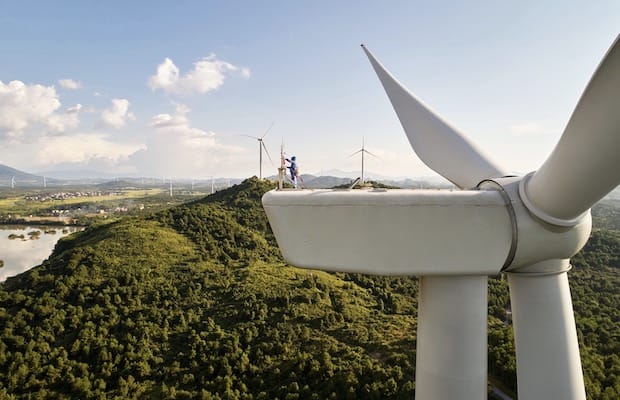 Apple has announced that the China Clean Energy Fund, which it had launched along with 10 of its suppliers in China has invested in three wind energy farms in China with a combined generation capacity of 134 MW.

The fund which is a new, first-of-its-kind investment fund in China will connect suppliers with renewable energy projects in the country. The 11 members have pledged to invest nearly USD 300 million by 2022 to develop projects totaling 1 GW of renewable energy. The three wind farms in Hunan and Hubei province will generate approximately one-tenth of the anticipated overall project total.

Dao County in Hunan Province, China, beyond the city of Yongzhou, houses the Concord Jing Tang and Concord Shen Zhang Tang wind farms. Developed by the Concord New Energy Group, each farm generates 48 MW of clean energy. Along with these, a 38 MW farm in bordering Hubei province developed by Fenghua Energy Investment Group Co., Ltd., has also been invested in.

“To see these projects completed and already supplying clean energy to the grid is really exciting,” said Lisa Jackson, Apple’s vice president of Environment, Policy and Social Initiatives. “We are proud that suppliers participating in the fund share our commitment to supporting innovative energy solutions, cutting emissions and fighting climate change.”

The wind farms in Hunan and Hubei will also impact their local economies and governments helping each province reach mandated renewable energy goals. In Dao County, which is classified as a state poverty county, the revenues from the construction and running of Concord Jing Tang and Concord Shen Zhang Tang farms also provide important sources of income.

“We’re excited to support developers like Concord and Fenghua,” said Yuyu Peng, director of DWS Group which manages the China Clean Energy Fund. “The projects in Hunan and Hubei provide so many positive results. They not only support China’s renewable energy goals but also introduce our fund partners to diverse clean energy projects.”

Transitioning to clean energy can be a challenging process, especially for small companies. By virtue of its size and scale, the China Clean Energy Fund will give its participants greater purchasing power and more attractive and diverse solutions.

With the launch of the global Supplier Clean Energy Program in 2015, and initiatives such as the China Clean Energy Fund, a growing number of manufacturing partners — 44 suppliers in 16 countries — have committed to using 100 percent clean energy to power their Apple production. Apple and its suppliers will generate more than 4 gigawatts of clean energy worldwide by 2020. This will cover one-third of the electricity needed for Apple’s global manufacturers and suppliers.

“We’re confident that these programs can be used as a model globally to help achieve our goal of 100 percent clean energy,” said Lisa Jackson. “The projects in China show what’s possible when companies, governments, and innovators step up together to address climate change.”