New data shows the Americas and the Caribbean installed 13.4 GW capacity of onshore wind power in 2019, an increase of 12 percent on the previous year 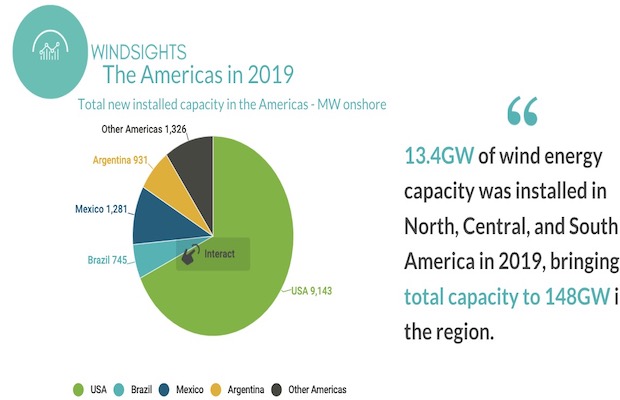 The latest data released by the Global Wind Energy Council (GWEC) shows North, Central and South America and the Caribbean installed 13,427 MW (13.4 GW) capacity of onshore wind power in 2019, an increase of 12 percent on the previous year which saw 11,892 MW installed.

In North America (Canada and USA), new capacity additions grew by nearly 18 percent compared to 2018. In Central and South America and the Caribbean, new capacity additions decreased by 5 percent compared to 2018. Overall, this means that the region has tripled its wind power installations since 2010, showing the immense progress made by wind energy as the leading power source in the Americas.

In North America, the US saw an installation rush last year with nearly 10 GW installed. This was driven primarily by the Production Tax Credit (PTC) phase out and is expected to continue driving installations in 2020, while the recently approved one-year PTC extension is likely to create a new installation rush in 2024.

In Central and South America and the Caribbean, strong growth has occurred in key markets such as Mexico, Argentina and Brazil. However, the outlook for wind power in the next two to three years in some of these markets – namely Argentina and Brazil – is threatened by regulatory and political challenges.

Key insights from the data include:

Ben Blackwell, CEO of GWEC said “it is encouraging to see that installation levels for wind energy in the Americas are continuing to rise. However, policymakers need to be doing more to accelerate these volumes and take advantage of the full potential wind power has to offer. Meanwhile, the ongoing trade war between the US and China continues to constitute a threat for the industry, as tariffs on steel and aluminium, which make up about 90 percent of wind turbines, put price pressure on the US supply chain and risk increasing wind power projects by as much as 10 percent.”