According to a recent study by RMIT University (The Royal Melbourne Institute of Technology) , if Australian government-owned airports had large-scale rooftop solar systems installed, they could produce enough electricity to power 136,000 homes. That makes airports a far more attractive and effective prospects for rooftop solar, than a campaign targeting households.

Researchers at RMIT University compared electricity generated by residential solar panels in a regional city to the potential green energy production of 21 leased federal airports. They found if large-scale solar panels were installed at the airports, they would have generated 10 times more electricity than the city’s 17,000 residential panels while offsetting 151.6 kilotons of greenhouse gasses annually.

“We can’t rely on small residential solar panels to get us to a zero-emission economy but installing large panels at locations like airports would get us a lot closer,” said researcher Dr. Chayn Sun.

The geospatial researchers evaluated the solar electricity generated from 17,000 residential solar panels over one 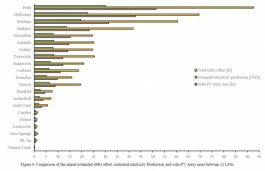 year in Bendigo, Victoria, for the new study published in ‘The Journal of Building Engineering. A Master of Geospatial Science student and lead author Athenee Teofilothen has mapped the buildings in every leased federal airport and recognized 2.61 kilometer square of usable rooftop space.

According to the researcher, airports are ideal for solar energy generation as they get complete sun exposure because of not being located near tall buildings and trees but, not getting used to their fullest potential. Even when Australia is already facing an energy crisis, yet our solar energy resources like airport rooftops are being wasted.

“Harnessing this power source would avoid 63 kilotons of coal being burned in Australia each year, an important step towards a zero-carbon future,” advised Dr. Chayn Sun, a geospatial scientist in RMIT’s School of Science.

“Australia received so much solar radiation, every airport in the country would benefit from having the right type of solar panels installed,” remarked Dr. Chayn.

The lessons from Australia will apply to Indian airports also we believe, where the nodal airport management agency, the Airports Authority of India (AAI) manages over 130 airports nationally. Add to those the massive airports at Delhi, Mumbai, Bengaluru and Hyderabad managed by other private sector entities, and the potential is immense. Small steps have been taken of course, especially at the trailblazing Cochin airport, but much more needs to be done.