Even though renewables added 83% of new power capacity in 2020, their share in global electricity generation increased by only 2.7%, shows a new report by REN21, a think tank and a multi stakeholder governance group focused on renewable energy policy. 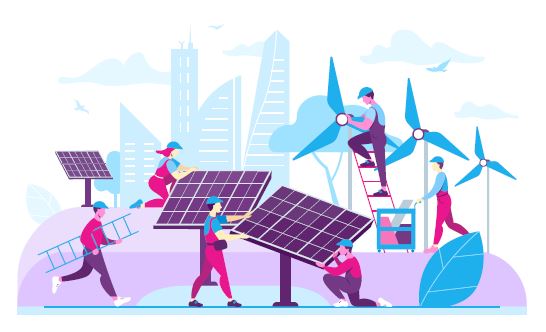 The Renewables 2021 Global Status Report finds that despite the impacts of the COVID-19 pandemic, renewable energy set a record in new power capacity in 2020 and was the only source of electricity generation to register a net increase in total capacity. More than 256 GW of renewable power capacity was added globally during the year, surpassing the previous record by nearly 30%.

The moderate growth of renewables in TEFC has the following causes:

Additionally, the report explains, despite calls by world leaders, leading economists, international organisations and non-governmental organisations for governments to use COVID-19 recovery efforts to advance the phase-out of fossil fuel subsidies, this support remained in hundreds of billions of dollars (USD 309 billion as of April 2021), far above the support for renewables (USD 264 billion ). In some cases, coal was explicitly supported in recovery packages, such as in Poland, which seeks to maintain coal operations until 2049.

In January this year, a study by climate and energy think tank Ember reported that renewables had overtaken fossil fuels as the European Union’s main source of electricity for the first time in 2020 as new projects came online and coal-power shrank, raising hope for renewables. While this is certainly good news, it does not tell the full story of the energy system. Not only is this progress in RE powered-electricity related to capacity creation rather than generation, but the power sector also accounts for a very small share (17%, of which 27.1% comes from RE) of final energy use when compared to transport (32%, of which 3.4% comes from RE) and thermal (51%, of which 10.2% is RE-based). Fossil fuels continue to dominate these sectors, and in the little portions that are occupied by renewable energy, bioenergy holds a substantial share.

The REN21 report notes that the first half of 2020, due to the global pandemic’s onset, it caused several problems in the renewables sector: supply chain disruptions, restrictions on the movement of labour and goods, postponed or cancelled auctions, etc. Concentrated solar power (CSP) and geothermal power markets both declined in the first half, but solar PV and wind power sectors rebounded in the latter part of 2020, and by year’s end renewables had installed a record amount of new power capacity—83%.

The renewable power sector hit an all-time high of more than 256 GW (solar PV – 139 GW; wind – 93 GW) of added capacity. The global market for hydropower, still the leading technology in renewable electricity generation, grew by 24% in 2020. However, these capacity additions did not result into an equivalent increase in renewables’ share in electricity generation, which recorded a dismal rise from 27.3% in 2019 to 29.0% in 2020. In effect, fresh renewables capacity has been taking care of fresh demand, not tackling base demand.

Clearly, the renewable energy industry needs to increase its efforts to impact core global energy demand, the beginning of which will happen with shifting focus from capacity addition to generation.