T-Mobile has announced several new moves that will bring the Un-carrier to 95 percent of its commitment to using 100 percent renewable energy by 2021. 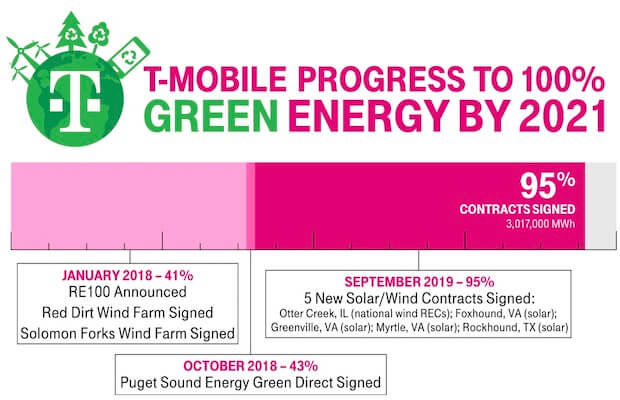 T-Mobile has announced several new moves that will bring the Un-carrier to 95 percent of its commitment to using 100 percent renewable energy by 2021. The announcements were made at the Climate Week 2019.

The announcements were led by ENGIE, the carrier’s previously announced partner, officially turning on its Solomon Forks Wind Project, now adding 650,000 MWh of energy to the grid annually. Additionally, the Un-carrier has inked deals on five new green contracts — four solar farms and another wind farm — that will be added to its clean energy provider portfolio when they come online by 2021.

“In 2018 we made a big industry-leading commitment to power all of T-Mobile, from cell towers to customer care centres to retail stores to headquarters with renewable energy. Why? Simple. We know our operations have an impact on the environment and we want to do what we can to reduce that. Efforts like the ones we announced just prove we continue to be all!” said John Legere, CEO at T-Mobile. “And by the way, I still challenge the other guys to do better and join us in our commitment to 100 percent green energy.”

The company is becoming a recognised leader in sustainability. Its commitments are featured as a case study in Digital With Purpose: Delivering a Smarter 2030, a report released by the Global e-Sustainability Initiative (GeSI) and Deloitte. The report calls upon global governments and businesses to identify ways to use digital technology to actualise the United Nations’ 2030 Agenda for Sustainable Development.

The sustainability efforts and achievements have also earned the firm top marks among US wireless providers on Green America’s Wireless Scorecard two years in a row, easily outscoring its competitors.

Recently, we reported that Texas-based telecommunications company AT&T has announced that its renewable energy purchases will surpass 1.5 gigawatts (GW) of clean energy capacity with the addition of new Virtual Power Purchase Agreements (VPPAs) with Invenergy and Duke Energy Renewables.