The global offshore wind industry had its 2nd best year ever in 2020 installing over 6 GW of new capacity, driven by a record year in China.

According to the latest data released by GWEC Market Intelligence, the global offshore wind industry had its second-best year ever in 2020 installing over 6 GW of new capacity, keeping growth on track despite the impacts of COVID-19 felt in other energy sectors. This growth was driven by a record year in China, which lead the world in new annual offshore wind capacity for the third year in a row, and installed over half of the new offshore wind capacity globally last year. 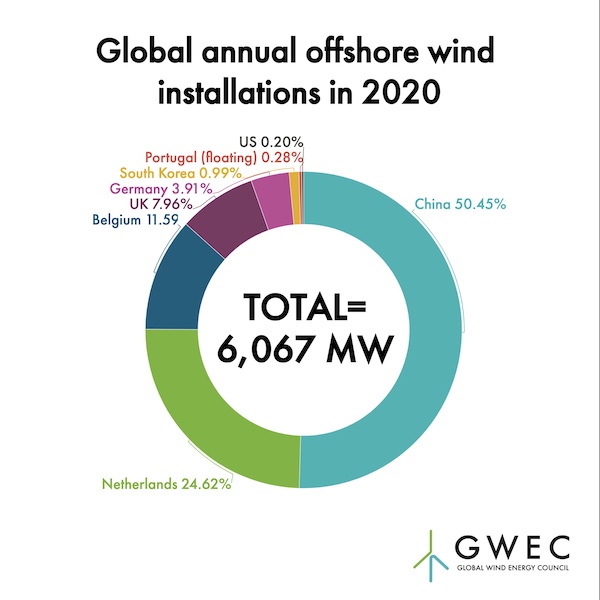 The market report shows steady growth in Europe, which accounted for the majority of the remaining new capacity, led by the Netherlands which installed nearly 1.5 GW of new offshore wind in 2020, making it the second-largest market for new capacity in 2020 after China.

Other European offshore wind markets also experienced stable growth last year, with Belgium (706 MW), the UK (483 MW), and Germany (237 MW), all installing new capacity in 2020. The slowdown of growth in the UK is due to the gap between the Contracts for Difference (CfD) 1 and CfD 2. In Germany, the slowdown is primarily caused by unfavorable conditions and a weak short-term offshore wind project pipeline.

The report highlighted that outside of China and Europe, two other countries recorded new offshore wind capacity in 2020: South Korea (60 MW) and the US (12 MW).

Feng Zhao, Head of Market Intelligence and Strategy at GWEC said “the continued growth of the offshore wind industry globally throughout the pandemic is a testament to the resilience of this booming industry. Although China was hit first by the COVID-19 crisis, the impacts on the offshore wind sector were minimal, resuming ‘business-as-usual’ as early as March 2020. China’s record-breaking growth is expected to continue in 2021, driven by an offshore wind installation rush to meet China’s Feed-in-Tariff deadline by the end of this year. 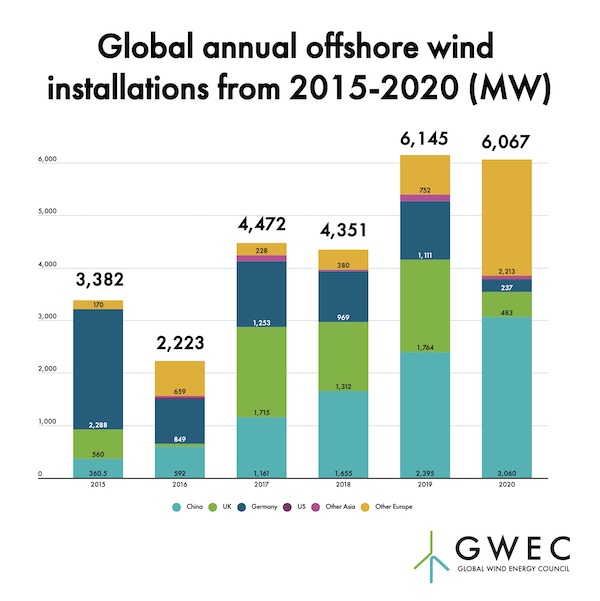 According to the Q4 2020 Wind Energy Auction Update by GWEC, nearly 30 GW of new wind power capacity was awarded globally through auctions in the second half (H2) of 2020, which is a slight increase compared to the 28 GW awarded during H2 2019. With the surge in new auctioned capacity being touted as the signal of the industry being back on track after COVID-19.