GWEC has published its first quarter wind auction database, reporting that a total of 3.35 GW of wind power capacity was auctioned in the period. 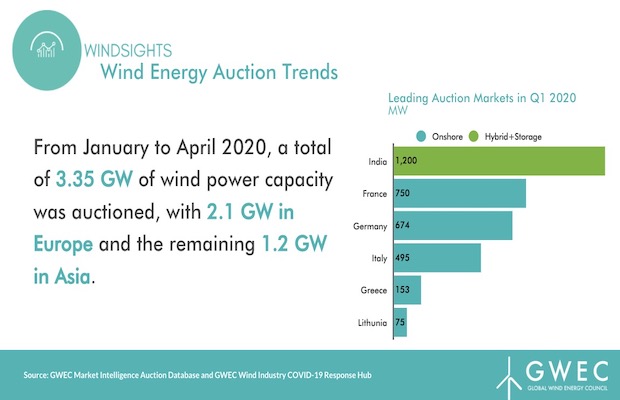 The Global Wind Energy Council (GWEC) has published its first quarter wind auction database under its Market Intelligence’s services. The database reveals that from January to April 2020, a total of 3.35 GW of wind power capacity was auctioned, with 2.1 GW in Europe and the remaining 1.2 GW in Asia.

It also stated that during the same period in 2019, nearly 5 GW of capacity was auctioned. This significant difference can predominantly be attributed to the COVID-19 crisis, with delayed and postponed auctions in key markets such as Brazil, China, and the US for offshore wind.

However, many key markets for wind energy have continued their auctions as planned despite the crisis, which will be important in securing the growth of the industry. In India, the world’s fourth-largest onshore wind market, 1.2 GW of renewable hybrid capacity was auctioned for projects that include both an energy storage system and renewable energy capacity. A tender for another 2 GW of wind energy capacity was announced on March 7, 2020, with tariff caps removed from the auction to boost investment.

Further adding that in Europe, France held its fifth auction round for 1.7 GW of renewable energy projects, awarding 750 MW of this capacity to onshore wind projects. While this wind tender was oversubscribed, the next round which was originally scheduled in July will be shifted to November due to the COVID-19 crisis. In Italy, the first tender was held under the country’s new renewable auction scheme in February, resulting in 495 MW of wind capacity. Germany also executed two of its renewable energy auctions out of the seven planned for 2020, however, both onshore wind tenders went undersubscribed, drawing just 674 MW of capacity out of the 1,200 MW available.

Emerging wind markets in Lithuania and Greece also held auctions in Q1 2020. In Lithuania, the first technology-neutral renewable energy auction was held, resulting in 75 MW of wind capacity. In Greece, their second join wind and solar auction in April 2020 resulted in 153 MW of wind power capacity and a record-breaking tariff of EUR 0.04911/kWh for a 200 MW solar project.

At the other end of the spectrum, the analysis stated that looking ahead, the COVID-19 crisis is expected to delay further auctions this year. Brazil has postponed all tenders in 2020 and Colombia is unlikely to issue any new tenders this year due to a drop in energy demand from the crisis. New York has also decided to hold off on plans to solicit a second round of offshore wind bids this year. Other countries such as Germany and Greece plan to go ahead as planned with their scheduled auctions, but with stipulations such as extending deadlines for licensing and construction and not announcing the results immediately so that project deadlines do not come into force.

“While the current crisis is impacting wind power development across the globe, it is crucial that policymakers adapt not only the auctions that are scheduled, but also extending project commission deadlines for auctions that have already taken place to ensure that projects can realistically meet their deadlines considering the major disruptions on supply chain disruptions and the flow of workforce caused by the crisis,” the report stated.