At a time when the crisis in auto sales has everyone’s attention, Yulu, the Bengaluru based firm focused on micro mobility couldn’t care less. In a discussion with Group Editor Prasanna Singh, Yulu’s CEO Amit Gupta discusses the firm, its experience so far with electric mobility and its hopes. 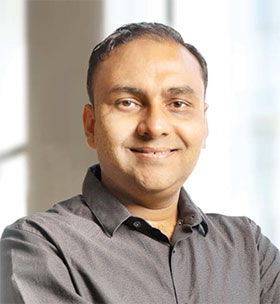 For Yulu’s Co-Founder and CEO Amit Gupta, whose other co-founders include RK Mishra, Hemant Gupta and Naveen Dachuri, the decision to go with Yulu was an easy one. “Yulu is ‘simple’ in Chinese and we are very confident that like the fintech revolution, where India has sailed quickly through credit cards, debit cards to frictionless transactions, we will move the same way to the future of mobility which is small, sustainable and shared.” It’s a vision that has seen this Bengaluru based firm hit 10,000 vehicles on the road, including 8,000 cycles and 2,000 of its Yulu Miracle EV’s.

Like many other services, ‘last mile connectivity’ is a bugbear that public transport has also struggled within India. For Bengaluru-based Yulu, solving this “first and last mile problem”has become its reason for existence as the firm spread out to the NCR region in early September, the fifth city it has tracked on its journey since starting off in March last year in Bengaluru. Like its operations in other cities, including Pune, Greater Mumbai, Bhubaneswar, besides Bengaluru, in Delhi too the firm has tied up with a key public transportation body.

Gupta asserts that ,“we are dealing in mobility. It has no meaning in isolation, so we have to work with the city government, the public transportation of that city”. The Delhi Metro Rail Corporation (DMRC) model follows the Bengaluru model where the firm has tied up with Namma Metro and the bus operator.Even in Mumbai, we are part of the CIDCO network and primarily in Powai right now. And now a meaningful presence in Navi Mumbai. It made more sense to us than Mumbai. With the success there, it is easy for officers and bureaucrats to see that it works, making them warm to the idea of helping us for the main city launch soon”.

Yulu offers two options to its users: a cycle called ‘Yulu Move’ and the Yulu Miracle, a two-wheeled electric vehicle that is dockless and powered by its own IoT technology. Delhi is the first city where it has gone only with the ‘YuluMiracle’. The Miracle comes with a 1 KW battery pack that can travel 60 kms on a full charge at a maximum speed of 25 Kmph. Although at 15 percent remaining charge, a warning goes off and the firm prefers to take the vehicle off the road for recharge.

According to Gupta, “we started with bicycles and got a lot of learning. Like average distance travelled in Bengaluru was 2 kms on our cycles. In Delhi it would have been max 1 km on a cycle due to the weather and other issues, so we went with a battery or EV only option here. Barring some campus use cases in Noida and surrounding areas, where we are open to bringing in the Yulu Move”.

Stressing on their flexibility, he adds that “we are a micro mobility platformand we understand the areas mobility need. So we will place assets that make sense. So inside a corporate campus in Bengauru, it might be cycles. For Inter campus commutes (longer distances), users might prefer the Yulu Miracle. “

The logistics of running the operation are not easy. “Our ops run 24X7”, says Gupta. “So rather than charging our vehicle, we actually charge the battery remotely, and swap it at the spot. We have created a network of charging boxes to charge batteries, placed across areas where we operate at partner locations and even mom and pop kirana stores for a monthly fee. Like a gym locker, we have this smart box created for a Yulu application team so they can locate which battery needs to be taken out and swapped. Every battery is uniquely numbered so now they can locate the vehicles that require charging. At a 15 percent threshold, two things happen. First, the scooter is no longer available for hiring. Next, a task is added to the operations team member to go and swap the battery. So much like a cloud kitchen in food delivery, my guys pick up the batteries from those locations and deliver it to the scooters that need a fresh charge.”

Interestingly, while Yulu runs operations completely in five cities it is present in, for Bhubaneswar it has gone with a different operating model. Yulu has a local partner in the city who runs operations while the assets have been funded by the city government.“Strategically we understood the importance of involving local entrepreneurs who understand the city better and can make the service successful faster. It’s also a smart and progressive city so when we found a strong partner, it seemed the right move”.

The firm has also learnt from global cases, besides its own early experience in Bengaluru when it came to operational logistics. Gupta says “one of the biggest challenge we faced, where we had to change from global templates, was to change the approach to parking policy. Initially, firms in this space went with a dock less model, which meant users could pick and leave the cycles almost anywhere. This model quickly became a problem as, besides high theft and vandalism rates, we could see city governments coming after firms to find a better solution to the ‘clutter’ being created. In August 2018, after almost six months of execution, we moved from dockless to specific parking areas we named Yulu Zones. This is the virtual docking model where there is a docking station, and discipline in parking. This is a welcome change then in line with our overall objectives as cities will look cleaner and more organised. And lower costs for operators like Yulu”.

A second change that Amit is chuffed about is the evolution of their EV, the Yulu Miracle. “ We experimented with close to 25 vehicles from India, Korea and China. We researched extensively on the key features that will really matter on a shared mobility vehicle. After nine months, we finally arrived at the Yulu Miracle. Designed by us, built in China, and assembled in India. The batteries in its vehicles, are currently being sourced from a Delhi-based vendor. The Yulu Miracle has got us amazing feedback from users, including women, for being so user friendly. You can easily drive it in a saree too!” At 43 kgs, the ‘bike’ is light enough to be easily manoeuvrable too, claims Gupta, adding that anyone over 5 feet can comfortably ride it.

So how do you actually get started with a Yulu rental?

A user simply needs to download the Yulu app, input a verifiable phone number,pay the initial security deposit of Rs 250 (In Delhi), and you could be on your way from any Yulu zone nearby. The vehicle is unlocked through a QR code on the app. While Yulu is offering only the Miracle, or battery powered bike in Delhi, in other cities it offers the Yulu Basic, or pedal powered bikes too.

While pricing is common for now,”our platform allows for differential pricing, as every city has its unique needs,” says Gupta.

“For Delhi, we have around 40 Yuluzonesand cover 9 metro stations. Till we spread our network, we have created a special concept of evening package called ‘Yulu Keep’ where someone can take the vehicle from the metro station and bring it back the next day. There is a three hour saver pack for Rs 99.Tourists can also avail this facility as Yulu supports payments from all international debit and credit cards”.

During normal hours, the Yulu Miracle offers a pricing package of Rs 10 for activation, and Rs 10 for every subsequent 10 minutes. Or Rs 70 for one hour. Users seem to like it, going by Gupta’s claim of 4.5 to 5 million rides taken on their vehicles since they started off, including on Yulu Move.

How does the firm plan to tackle the safety aspect of driving by its users?

“Technically our Yulu Miracle is a cycle. There is no age bar in the policy document. However, keeping in mind user safety, we have ourselves put an age restriction of 16 years and above for users.” Gupta says they did experiment with helmets for users in Pune but were rebuffed by users on various grounds like hygiene, fit, or even looks. But the company plans to keep encouraging users, especially its regulars, to go for helmets with a plan to start retailing branded helmets on a leading ecommerce portal soon.

The firm counts itself lucky when it comes to mishaps considering the fact that a lot of its users are getting back to two-wheeler driving after a long gap at times. Reports of accidents have been in the single digits so far. The firm insures Miracle users for Rs 2 lakh against accidents, and cycle users for Rs 1 lakh. Of course, as Gupta says, the fact that as a slower vehicle, all driving typically happens on the left of the road, reduces the risks considerably of any serious accident.

Started with seed funding, Yulu’s attention to detail and planning the full stack of ‘micro mobility’ has won it the confidence of investors, with the firm raising USD 7 million in March 2019 from investors including Wavemaker Partners, Blume Ventures, 3One4, Grey Cell Ventures, and Incubate Fund India. The big question is, 2 years from now, will it along with other firms in the business be able to count decongesting Indian cities among their achievements? That, is a billion dollar answer.