Nurturing Quality is Tad Stronger in Women than Men

There is an intrinsic advantage in being a woman-leader in the sustainability & CSR space. Without generalising to a point of fault, I think it would be fair to say that the nurturing quality is a tad stronger in women than men, purely from a standpoint of natural disposition, believes Shalini Singh, Chief – Corporate Communications & Sustainability, Tata Power, part of Tata group and a leading player in the electric utility space. In conversation with Manu Tayal, Associate Editor, Saur Energy International, Singh shared her views on various topics related to women in the solar space. Here’re the excerpts from that exclusive interview published in the Saur Energy International Magazine’s March 2019 edition:

Q. What prompted you to come into the renewable sector? Also tell us something about your journey as working woman. 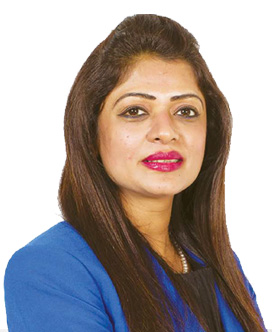 At Tata Power I play a dual role of Chief of Corporate Communications and Chief of Sustainability which comprises of Sustainability and CSR initiatives. I am also the Managing Trustee and CEO of Tata Power Community Development and Chief of Tata Power Skill Development Centre. I have been with Tata Power for over 15 years now and have been a women director on the board of subsidiaries such as Tata Power Delhi Distribution Limited and Solar MP Limited. Before joining Tata, I worked in the communications space for various bluechips like Accenture, Arvind Mills, Airtel (Bharti Group) and Kale Consultants. What makes my current role in Tata Power unique and exciting is the other hat I wear as Chief-Sustainability, CSR & Chief-Skill development centre. I consider this unique because of the larger role and the potential impact it can have on the world at large. Today we have women in jobs that were considered a no-go area for long. Women have proven time and again that there is no such job that only a man can do. But this can be easily misunderstood as confrontational or doing it to prove a point. To me it is much more than that. Irrespective of gender every professional worth her or his salt, deep down, wants to make a difference in the world, that is, beyond what the job role demands. But how many get such an opportunity and that too not only as a team member but as one who leads.

I believe there is also an intrinsic advantage in being a woman leader in the sustainability & CSR space. Without generalising to a point of fault, I think it would be fair to say that the nurturing quality is a tad stronger in women than men, purely from a standpoint of natural disposition. So to make the best out of skills I have acquired and honed as a communicator along with certain advantages natured has bestowed seemed like a good way forward to have a meaningful and fulfilling career. So the renewable business within one of India’s largest energy companies is perhaps the best option for someone like me. I am also on the Niti Ayog’s committee for Women Entrepreneurship Committee.

Q. Share some of your experiences in the solar industry that will encourage other women to join the sector?

Not just solar, but in the larger context of renewable energy, women have unprecedented opportunities to tap into today. As a mass movement (that is greater adoption of renewable energy across the world), this is certainly a sunrise industry. Being new, it does not suffer the same level prejudices other more traditional sectors suffer from. Before getting into specific success stories within Tata Power, it is necessary to understand why women are a natural fit in this space. As key decision makers at home, as caregivers, as entrepreneurs and also as leaders within the communities, women have a big role to play in the renewable space.

There is a strong advocacy element that comes with this role. Whether we like it or not, a push for behavioural changes, like adopting a clean energy lifestyle, finds greater acceptance when it comes from women. This unique consumer psyche is in fact universal. Today renewable energy is finding greater acceptance among new consumers in the market. This new ‘Reflex Generation’ are more demanding than their parents or those from an earlier generation. This generation quite rightly expects brands not only keep an eye on prices but also how they do their business in terms of impact on the community, environment etc. This generation also has some influence in their ecosystem ie their parents etc to enable them to adopt renewable, something they probably would have never considered on their own. This is a big advantage that must be exploited to its fullest measure possible because the outcome will help the world move toward a cleaner environment and fight the scourge of global warming and its consequences on human survival.

At an anecdotal level, I can give you several examples that will encourage other women to join hands in the renewable energy movement. For example, Tata Power’s Club Enerji program that targeted school children, parents, teachers and school administrators with the message of energy conservation and sustainability. The success of this outreach from Tata Power is quite significant. Today we have covered over 530 schools nationwide, sensitizing over 19 million participants and saving more than 25 million units of energy. Remember, we had started this project as a pilot in just 12 schools in Mumbai in 2007. Also today we also have over 1500 Mini Clubs that has managed to create 238,385 Energy Champions, and 283,473 Energy Ambassadors, making it one of Tata Power’s most successful community support initiatives.

Similarly our resource conservation program lays emphasis on saving water, fuel, paper and electricity targeting the youth and influencers in their lives like teachers, parents etc. This program was piloted in 2011-12 and is advocated on five essential pillars — afforestation, waste management and energy, fuel and water conservation. In 2012-13, after successfully piloting this program, we took it nationwide and it is truly making a difference in the lives of people at large. Outside the energy space, our work in the conservation of biodiversity is also making a big difference to women. The Act for Mahseer (fish), among other objectives, helps women in rural India find an alternative source of livelihood even while they work in farms. This is perhaps women empowerment at its best, literally teaching them how to fish than provide one for the next meal!

Q. In your view, what should be done to increase the overall women participation in the industry?

There is a lot we can do. Participation in the renewable energy need not take only the formal route. Creating an ecosystem for training women to become an integral part of the renewable energy sector will be the first big step. We are already doing this and a lot more can be done here in terms of reach. As mentioned earlier, women are a perfect fit for bringing about behavioral changes when it comes to how we consumer energy in our daily lives. So in the area of advocacy, all the way up to the village level, women can be the change agents at grassroot level. Creating targeted self-help groups is another initiative that can be taken up nationally. All of these are interconnected and policy and decision makers at a national and global level must look at them like that, because it not only moves the world to a cleaner future but also a fairer and sensible one in terms of creating opportunities for women.

Q. A working women has to look after her family and office both simultaneously. How do you balance this?

The choices women have today is far wider than what it was earlier. Career or family is also not a very binary as it is made out to be where women have to choose between just these two. I agree we have a long way to go where women can have both and perform both these roles well and enjoy a more holistic life. I think it is simply a question of balancing these two without taking too much pressure from either side. Many are doing it quite well. But as a society we also need to create a fairer ecosystem for women to pursue a career and a wholesome family life without compromising too much on either. For example, we still don’t have a very conducive environment for women who wish to take a break to start a new family and wish to come back to work after a couple of years break. This not only deprives the country of the benefits of a healthy and productive citizens but is also not fair to women who carry this cross entirely on their own.