For the Discom, smart grid can give out right information at the right time so that it can react and manage the grid accordingly. It would give a better control on the grid to manage load and even know beforehand on the impending load based on past data. This will allow Discom to draw appropriate level of power, neither more nor less. This would bring about a significant change in operational efficiency. With all relevant information available easily, cost may easily drop, believes Sanjeev Sinha, President – IT & Digital Transformation, India Power Corporation Ltd, one of the leading players in the electric utility space. In conversation with Manu Tayal, Associate Editor, Saur Energy International, Sinha shared his views on various topics related to digitalisation in the power sector. Here’re the excerpts from that exclusive interview published in the Saur Energy International Magazine’s April 2019 edition:

Q. Kindly shed some light on India Power Corporation (IPCL) and its efforts towards digital transformation? Key highlights from the past year? 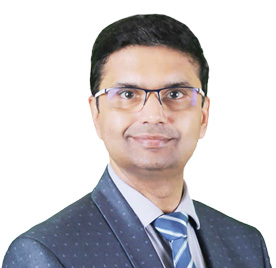 IPCL aims to become a smart utility and has become so to a large extent. It started with our customers where we switched from old analog meters to smart meters. To have better control over our network, we have implemented SCADA (Supervisory control and data acquisition) in our distribution business.

To monitor its distribution transformers, IPCL installed smart meters and IOT devices which sends data to cloud so that engineers can see the parameters almost at real time. This has reduced outages significantly thus benefitting our customers.

IPCL has implemented technical architecture to bring all disparate data to a single repository so that automated and intelligent reporting has become possible. This has helped decision makers see reports and quickly react. We even have automated reports sent to stakeholders every morning.

The architecture also allows different smart meter clouds to send data to the single repository thus enriching reporting systems in the company. Similarly, many reporting systems have been revamped and automated. IPCL is climbing up the maturity ladder to handle its data more efficiently.

Going forward, customers will get SMS of any outage and get their power usage patterns on their mobile phones. We at IPCL are digitally linking the entire network from feeder to customer.

Q. How can digitization be helpful for the companies in the renewable energy space?

Some of renewable energy solution providers based in India have started using forecasting models to forecast energy output across wind farms. Such a forecasting energy output is reported for feed into national grid well in advance. Clearly, the future of renewable energy sector is digital. The industry leaders and savvy investors who embrace this coming wave of energy innovation will reap the rewards.

Q. How do you see the advent of Internet of Things (IoT) helping the power sector?

IOT has been a proven technology in many sectors and power sector is no exception. Various parts of power sector like – Generation, Transmission, Distribution, Renewables etc. have all benefitted from adoption of IOT. Since distribution companies deal directly with consumers, the use of this technology in distribution sector has benefited the customers directly.

For any distributing company (Discom), measuring and monitoring the performance of assets such as Transformers are of utmost importance. Gathering some crucial information about transformers like load, temperature etc. on real time basis (or at least on a frequent basis) can make several decision making process faster and efficient. For example, in order to cater to a New Service Request, a Discom must know the nearest distribution transformer and the condition of that transformer. Similarly, knowing crucial information like peak load as a function of time can be made available to Discom to manage the load better thus reducing chances of load mismatch.

As I see it, with higher adoption of IOT, there is a tsunami of data coming and power sector must plan to use them intelligently for customer’s benefit as well as their own.

Q. As India has varied climatic conditions, have you had to customize offerings for Indian conditions?

Technology adoption is more a function of digital technology maturity of an organization than anything else. With higher maturity level, customization is relatively simple. Hence, power companies should work more in digital adoption and going up the digital maturity level. The rest will fall in place.

Q. Currently, how do you see the role of storage in the renewable sector in India? Growth rates?

Renewable power (Solar, Wind etc.) is largely weather dependent. Therefore even with more and more renewable energy production, it is likely to be a energy mix. This makes energy storage all the more an important aspect. Storage technologies will allow more reliable operation of electricity distribution and transmission grids, enhancing electric power quality and making renewable energy user friendly. There is a need to scale up energy storage in a big way, more so since India plans to move towards electric vehicles.

India’s National Energy Storage Mission is a great step in this direction. Hence, a lot of exciting changes are expected in the next few years in the area of energy storage.

Q. After converting a Grid into a Smart Grid, in your view, how much of an impact did it have on Grid efficiency? Will the cost & logistics factors supportive?

Smart grid, if properly adopted, would bring in several changes in the operational efficiency. It would reduce outages thus increasing customer satisfaction. For the Discom, smart grid can give out right information at the right time so that it can react and manage the grid accordingly.

It would give a better control on the grid to manage load and even know beforehand on the impending load based on past data. This will allow Discom to draw appropriate level of power, neither more nor less. This would bring about a significant change in operational efficiency. With all relevant information available easily, cost may easily drop.

One of the biggest benefit of smart grid would be to understand needs of customer or a group of customers so that they can be serviced better.

Q. Can IoT be helpful in trimming the Grid issues such as outages and productivity? What size of Grid (max.) can be managed through single application?

Yes, IOT can bring significant benefits such as lowering outages and increasing productivity. While benefits of IOT technology are well proven, its success depends on the rollout model a power company adopts. This is dependent on many factors like number of data points, data usage mechanism, using right algorithms, adoption by users, change management etc. Different functions in power sector have used IOT differently.

Its use has typically been guided by the maturity model the company adopts. Typically, most companies follow the maturity models wherein they start using it for monitoring, then for controlling and ultimately for automation (like self healing network etc.). Most successful adoptions of IOT technology have gone through these stages of maturity.

There is no limit of grid size that can be managed. The advent of big data and its associated technologies allows large amount of data from large grids to be managed efficiently. There are many frameworks available that allow distributed processing of large data sets across clusters of computers using simple programming models.

Q. India and China remain one of the few large countries where share of thermal is still very high. Do you see this situation changing by 2025? What is the outlook for thermal power in the long term of 2030 and beyond according to you?

Globally, China has been the biggest investor in renewable energy. India too has set aggressive target of reaching 225 GW capacity by 2022. The various reports for these two countries show that both are aggressively moving towards increasing percentage of renewable energy contribution in installed capacity.