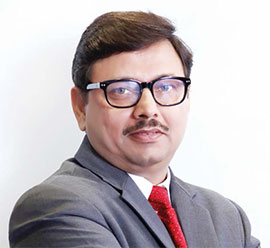 The only challenge that we can foresee is in terms of availability of finance and cost of finance available for renewable energy sector. Sources of finance for both solar manufacturing industry and solar deployment industry are scarce, a large part of funding comes through the FII and availability of domestic finance at viable cost is still a distant dream for renewable energy industry, believes Rajendra Kumar Parakh, CFO, Vikram Solar, Kolkata-based high efficiency PV module maker and comprehensive EPC solutions provider with global footprints. In conversation with Manu Tayal, Associate Editor, Saur Energy International, Parakh shared his views on various issues which the power sector is currently dealing with along with his company’s future plans in the renewable space. Here’re the excerpts from that exclusive interview published in the Saur Energy International Magazine’s March 2019 edition:

Q. Do share details about Vikram Solar’s total manufacturing capacity till date. How has it grown over the past three years? Are there any plans for further expansion?

Q. Vikram Solar recently commissioned a 200 MW solar project in Andhra Pradesh, kindly shed some light on this and generally what is the average CUF on such projects?

We commissioned a 200 MW (2×100 MW) Solar Power Project for Andhra Pradesh Power Generation Corporation (APGENCO) on 19th February 2019. We received the project of installing 2 blocks of 100 MW plants on 9th March 2017 after competing in regards of- Design, Engineering, Manufacturing, Testing, Supply, Packing and Forwarding, Transportation, Unloading, Storage at site, and commissioning capabilities. Project is spread across 1000 acres (500 Acres each for 100 MW) of undulated rocky terrain, and power to be evacuated at 33 KV level in 2 Pooling substations of 33/220 KV capacity, which will further evacuate power to 220/400 KV main Substation.

The plant will generate 446 MU (223 MU x2) energy annually and will power nearly 1,50,000 homes once connected to the grid. So, Capacity utilization factor of this project is 446 MU (223 MU x2) energy annually. We are proud to have completed this 200 MW solar project or conservative clients such as- APGENCO, testifying our resolve and commitment to contribute to National and Global solar revolution.

Q. Has the safeguard duty led to any significant positives for manufacturers? Why/ Why not?

For projects, which were auctioned before the implementation of Safeguard Duty, developers are inclined to buy imported solar modules as they can pass on the cost of duty to end of consumers, under change in law clause only if the modules are imported. Also for the project, which were auctioned out after the implementation of SGD, procurement would be done in second half of 2019. So the SGD didn’t yield any positive results for the domestic manufacturers.

As a domestic solar module manufacturer, the majority of our solar cells came from China (as Indian solar cell manufacturing capacity is low). Therefore, imposition of Safeguard duty on the cells and modules manufactured in SEZ (India) has made thriving in the market very challenging.

It has increased domestically manufactured solar equipment cost, thus pushing domestic module manufacturers out of the market and also raised project costs, which has adversely affected project growth within the country.

Q. In your view, what are the main challenges domestic solar industry is currently facing and where do you see the future of the Indian PV market?

Indian solar industry is expected to show better results in 2019 than 2018, which witnesses slow down caused by many tender cancellations. The only challenge that we can foresee is in terms of availability of finance and cost of finance available for renewable energy sector. Sources of finance for both solar manufacturing industry and solar deployment industry are scarce, a large part of funding comes through the FII and availability of domestic finance at viable cost is still a distant dream for renewable energy industry.

Q. With the overall electricity market in poor shape due to discoms financial conditions, how can the government reconcile the need for low priced power with domestic manufacturing, that developers claim, leads to higher costs?

State Discoms are in bad shape since a decade, In 2015 UDAY was launched to ease the financial burden of the state Discoms, however it was not much effective, financial health of Discoms continuous to be bad shape. Owing to the financial health, Discoms are refusing to buy Solar power, at any tariff above INR 3. However, the average power procurement tariff for Discoms is INR 3.47/kWH. In our view, until and unless financial health of Discoms improves in a significant way, it would be very difficult for the government to reconcile low priced power with domestic manufacturing.

Q. Besides the race of achieving ambitious targets for solar, has industry started planning and implementing a recycling policy for solar equipment too?

Report from International Renewable Energy Agency (IRENA) and the International Energy Agency (IEA) show that India will produce over 78 million tonnes of solar e-waste by 2050. The PV waste will probably rise to 50,000-320,000 metric tonne by 2030 as a result of country’s solar targets. Therefore, it is important to have policies and guidelines to manage the disposal of PV waste.

Also, MNRE levies responsibility of disposal of solar PV cells and modules to the developers.

However, the issue is that these regulations do not specify management of used solar power systems. Industry still awaits a clear policy regarding recycling of solar equipment’s which will create a level playing field.

Q. Any forays into Rooftop segment directly, for instance? Or a retail play?

And many more. We have plans to enhance our contribution in rooftop solar sector in coming months.

Q. Do you believe the large manufacturing linked tenders, or even the 7.5GW tender in Leh-kargil could kickstart a wider manufacturing push in India?