Home » Blog » Wall Mount Solar Panels: How Much Are They Feasible For Indian Climate?

Wall Mount Solar Panels: How Much Are They Feasible For Indian Climate?

India is now aggressive in nurturing solar power and has set a target of 100 GW of solar power by 2022. 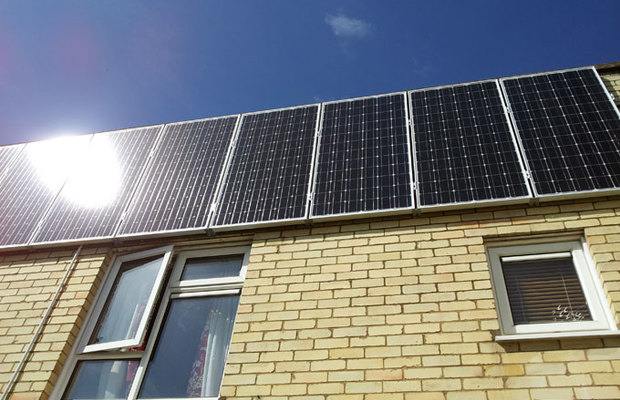 After installing solar plants at utility scale and rooftops, recently New-York-based developer Quixotic Systems has set up a 37-kW generation unit on the wall side of Urban Health Plan’s Simpson Pavilion. The hospital’s restricted and congested roof space led to a toward impracticality of setting up the traditional rooftop setup, but at four stories high, ample space was found south side wall of the building. The setup no doubt immediately gained attention and sounded feasible to be implied at various building struggling with the same issue of space.

The trend is new and not be the first choice as well, but can be adopted on completely obstructed rooftops. The solar panels work on the amount of sunlight receiving and not on the heat or temperature from the sunlight, hence it is very important to understand the climatic and geographical aspects before the setup is installed as likely done in case of utility and rooftop setups. In the process of installation of wall mount solar panels the average elevation angle of the sun is of imminence in order to reap maximum energy outputs.

To study the same, a low-tilt rooftop mounted arrangement was planned and a divider was mounted in New York, Alaska, and Florida, outlining all the utilization similar segments and framework measure.

Looking at the two methodologies in New York, some intriguing connections were observed. The wall-mounted setup exhibit performs equivalently to or superior to anything the rooftop mounted outline for the vast majority of the fall and winter. In the spring, generation tumbles off reasonably for the divider mounted cluster and fails to meet expectations contrasted with the winter months.

At last, a wall mounted setup in New York produces 30% not as much as the proportional rooftop mounted cluster. Not perfect, but rather apparently very respectable.

Of course, that distinction can change significantly depending upon the geographical conditions. A 30% creation hole in New York develops to 56% in Florida, however, is only 9.8% in Alaska. The generation diagrams for Florida and Alaska demonstrate a late spring creation plunge for the wall mounted setup in Florida, and crest in Alaska because of the outrageous northern scope. In spite of this lessening inaccessible light, wintertime picks up underway contribute fundamentally to the distinction underway just being 9.8%.

Most of the difference in production that we see here is driven by the angle of the sun relative to the array. Florida’s generation comes when the sun is at a high angle in the sky, with an average elevation of 47°, while Alaska and New York get sunlight from lower angles (because of their higher latitudes). The same weather and climatic conditions prevail in India as well. The major point to be taken into consideration is the solar angles and at what part of the country does it fall with the lowest angles?

India is now aggressive in nurturing solar power and has set a target of 100 GW of solar power by 2022. The major issue, especially in urban areas is the space crunch,  and hence the wall mounting set up can be of respectable importance in the scenario.

The utility solar plants and the rooftop solar plants are best to receive sunlight falling at angles around 90 degrees. The southern regions of the country are best suited for the same and utility plants need ample space to be set up usually found way far from the city. Rooftop solar panels are set up at a height and so has the advantage of receiving ample sunlight.

India’s North zone receives the lowest angles of sunlight, especially in the months of January (41°), Feb (49°), Oct (49°), Nov (41°) and Dec (34°). As we contrast the data the average data here as well is found to be 46.8°. Hence the conclusion is that the North region can adopt this new pattern in order to generate some more solar energy out of the traditional means of utility and rooftop solar scale plants. Though the generation is not at par incompetency with the utility and rooftop solar plants but is respectable and not that bad.