In our continuing series on battery tech and other firms to watch in the energy space, today we place the spotlight on Sila.

Sila is a battery tech company co-founded by a former Tesla engineer Gene Berdichevsky, also the CEO of Sila, Gleb Yushin, a Professor of Materials Science at Georgia Institute of Technology and an Editor-in-Chief for Materials Today, and VP of Engineering at Sila Alex Jacobs (also a former Tesla employee). Prior to Sila, Berdichevsky was the seventh employee at Tesla Motors where he served as Principal Engineer on the Roadster battery, leading the development of the world’s first, safe, mass-produced, automotive lithium-ion battery system. Jacobs designed and developed battery packs at Tesla, including those used in the Roadster and Daimler’s Smart Fortwo electric drive.

The firm is based in Alameda, California, US. Sila Nanotechnologies is a next-generation battery materials company charging ahead with its silicon anode for lithium-ion (Li-ion) batteries. The company is built on a solid platform of technology and innovations, with over a hundred patents, over 10 years, and 55,000 iterations that helped them develop a silicon-­based anode that is about five times lighter and two times smaller than graphite-­based anodes. Sila Nano materials enable higher volumetric energy density, which means more energy in each cell, and fewer cells in battery packs.

Sila hopes to bring its material to smartwatches, phones, and other gadgets in the future. The result will be slicker devices, longer battery life, or just room to pack in other helpful features that would otherwise be cut for size. Sila shipped the world’s first commercially available silicon anode for lithium-ion batteries in 2021. The American battery material maker was also named on TIME’s list of Best Inventions of 2022.

The company had its breakthrough in silicon anode material at Georgia Tech. A majority of Lithium-ion batteries today use graphite anodes. A problem with graphite is that 90% comes from China. Graphite’s CO2 emissions and environmental impact are high. The firm claims that its next-gen silicon material shatters the energy ceiling set by graphite anode li-ion battery, allowing it to boost energy density by 20% – 40%. 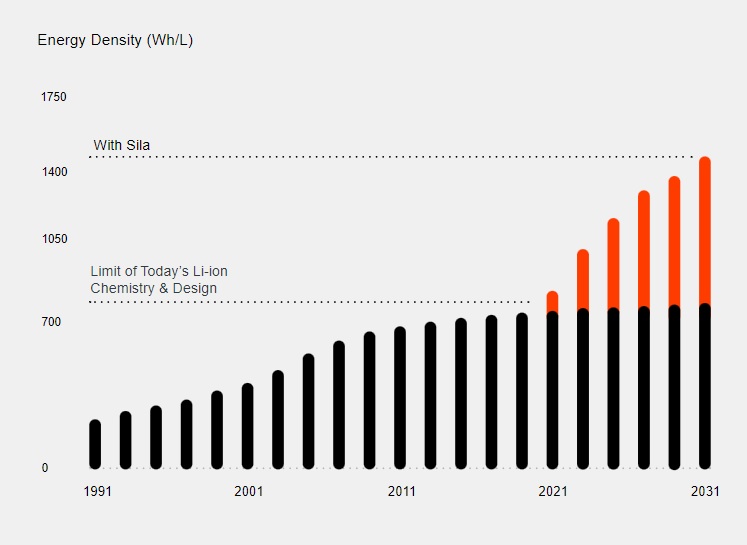 With greater energy density, big batteries get smaller, and small batteries get more powerful, which is a game-changer for product designers and cell manufacturers. Sila claims that its batteries give an energy density of over 800 Wh/L. In addition, Sila technology accommodates swell to preserve cycle and calendar life, charge performance, and safety.

Another benefit of a silicon anode is it stores lithium in a much smaller volume. The thinner Si anodes enable much faster charging.

“In the next five to ten years, we will see a $50 per kilowatt-hour (kWh) lithium-ion (Li-ion) battery cell that’s capable of fast charging, 10,000+ cycles, over one-million miles, a 30-year calendar life, and produced with abundant raw materials found all around the world and recycled. The demand for such a battery would reach unprecedented levels,” explained the company in a white paper.

The firm operates from Alameda Plant with a production capacity that will power over 10 million small consumer devices. Sila’s materials drive battery performance enhancements in consumer electronics devices and will power electric vehicles starting with the Mercedes-Benz. The new facility at Washington will be delivering for Mercedes.

By 2028, the firm aims to expand the plant for production up to 15x power. This is equivalent to 2-10 million EVs/year.