It’s necessary for a prosumer, who is going to install a solar system, to understand the relevant vocabulary before choosing the best energy metering option. Of course, in India, chances are you won’t really have a choice, as your options will be dictated by whatever is allowed in your region or state. For starters, a prosumer is a consumer who also produces electricity and sells it to the grid.

Rooftop solar systems are becoming more popular as customers become more aware of new business models and the availability of new business concepts. While many distribution firms are hesitant to allow rooftop installations because of the possible income loss, a few have recommended switching from net to gross metering. Now that is a truly bad idea for a rooftop solar owner, unless you are doing it just for the green energy, and not for any real savings to you as a consumer.

So just what are net metering, gross metering, net billing, etc? Depending on the option you get, it can make a huge impact on your return on investment, with or without solar subsidies. 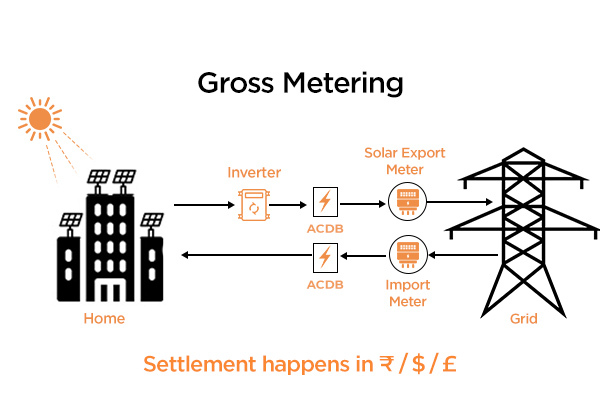 In simpler words, one continues to pay the retail supply tariff to the power distribution company (discom) for the power consumed from the grid. Consequently, the customer is compensated for the energy generated and exported to grid by use of his solar panels. Tariffs for feed-in and retail supply are rarely the same. This is usually a bad idea if you are a consumer, as the retail tariff will be much higher (upto 100% or more) than the price the DISCOM will pay for your power generated and supplied to the grid under gross metering.

Recently, the KSEB proposed to replace net metering with the gross metering principle for billing prosumers and slash the settlement charge it pays them from ₹3.22 to ₹2.44 per unit. The idea behind the move, as suggested by the authority, is that ‘net metering’ methodology is creating heavy financial burden on the DISCOMs. Thankfully, the proposal was shot down by the state regulator. In Gujarat, Gross metering for rooftop solar systems with 10kW and up to 1MW capacity is permitted, as per its new regulation Gujarat Electricity Regulatory Commission (Net Metering Rooftop Solar PV Grid Interactive Systems) Regulations, 2022.

Net energy metering (or NEM), or net metering, is easily the simplest, and most cost effective option for a consumer. With net metering, homeowners are able to sell leftover energy, generated by their panels, back to the utility company. Thus, if you have consumed a net of say, 500 units in a month, while ‘exporting’ 300 units back to the grid from your solar plant, you will need to pay the retail tariff for the remaining 200 units. In case your exports exceed the consumption, your balance units will be carried forward to be adjusted at the end of the year. 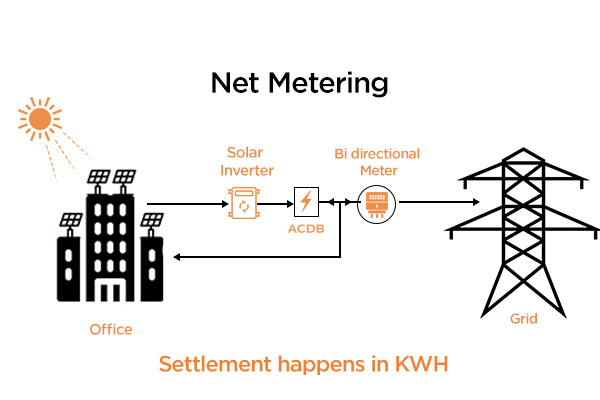 The adjustments might be made on a monthly, half-yearly, or annual basis. A bidirectional ‘net meter’ typically accounts for both power import and export. Notably, if the exported electricity is greater than the imported electricity, the surplus electricity supplied into the grid may or may not be paid depending on the state’s net metering rules.

Different states have different policies for net metering. Indian State of Gujarat allows Net Metering for rooftop solar systems having a capacity of 1kW to 1MW. In Uttar Pradesh, as per Solar Net-Metering policy of 2015, grid-connected solar PV systems are eligible for solar net-metering or gross-metering. Customer only pays for the difference. In case if the customer‘s energy imports is less than solar energy export to the grid, the excess is adjusted in the next month’s billing. At the end of the settlement period (usually a 12 month period), any balance and unadjusted carried forward excess export will be paid to the Consumer at a pre-defined tariff (rate/kWh), which will be notified from time to time by the relevant authorities.

Net Billing system provides actual direct payment to consumer for any excess of electricity generated and exported to grid. However, the  rates again will be lower as compared to retail tariffs, typically linked to the average power purchase cost of the discom.  This gives distribution companies a higher advantage over the consumers.

In gross metering, because 100% of the energy generated is exported and the PPA is for 25 years, the solar returns are guaranteed for 25 year. But your realisations are tied to the price you will be paid, even as  year after year, the normal electricity bill might see 5 to 7% increase in costs.

While in net metering, the solar system’s return depends on the amount of money savings on the electricity bill as a result of its installation. As the cost of power rises year after year, so do the savings from solar. electricity rights by the government offers a clear picture, in detail, regarding the same.