While talking about solar panel installation, it is prudent to design your system to generate as much solar energy as possible. In recent times, Bifacial solar panels have been gaining prominence, thanks to more competitive prices and efficiency.

A bifacial solar panel is a solar panel that can collect energy from the front side and the rear side. The technology traces back its genesis to as early as 1960s. Being too costly, it remained dormant while the broader PV market saw an explosion. Thanks to the recent cost drops and efficiency improvements, bifacial solar cells and panels are gaining traction once again in the market.

Bifacial cells made up 50% of the world market share of solar cells in 2021. As per International Technology Roadmap for Photovoltaics (ITRPV), the percentage is expected to increase to 85% by 2023. In fact, the solar tracker manufacturers also stated that the majority of recent solar projects using their tracking systems include bifacial panels.

The traditional monofacial solar panels have an opaque backsheet. On the other hand, bifacial solar panels have a reflective back or dual panes of glass holding the solar cells in place for absorbing the solar energy from both the surfaces. The panels are completely transparent, and are usually frameless without metal gridlines. This makes them stronger in structural integrity and easier on the eye.

Working of the Panels

Bifacial solar panels work just the same as any other normal solar panel. One of the surfaces absorbs the directly incident solar energy and converts it to electricity. This includes a portion of sunlight that is trapped inside the glass that bounces around until it is absorbed by a solar cell. There is a portion of energy that passes right through the panel unabsorbed in a monofacial panel. This is where bifacial differs. 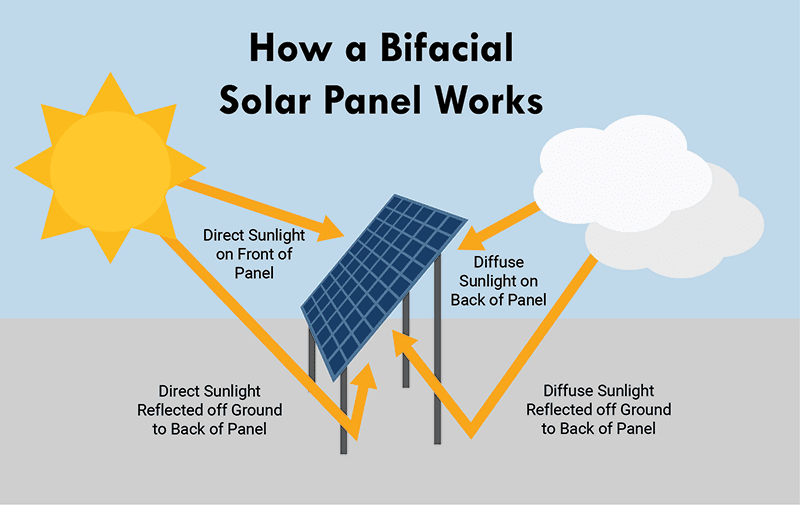 In a bifacial solar panel, the light passes right through it and collides with a highly reflective surface. Then this light bounces back towards the panels and gets absorbed from the rear side. This other side also takes care of the leftover residual energy bouncing back from various surrounding surfaces. This is the reason why bifacial solar panels tap more energy and generate additional electricity. The light reflected from other surfaces, such as ground, is called the ‘albedo’ light.

The power rating on a bifacial solar panels commonly used today is commonly 440 to 545 watts which indicates expected power generation under ideal sunlight and temperature conditions. While this power rating takes into account the power generation from the front of the panel, bifacial panels also present a second rating for the rear side of the panel. However, recent months have seen bifacials with output capacity over 600 Watts also being introduced into markets globally.

Right Way to Use A Bifacial Solar Panel

Bifacial solar panels work better in solar farms than for residential setting. These panels work best when they lie above around four meters from the ground. This is simply because the higher the panel sits, the more the light that passes underneath it is to be absorbed by the downside surface.

Albedo light capture is higher when the ground beneath the array has a white or reflective surface that reflects light more efficiently than darker colours. As per a research from Solar World, the ground surface albedo values for concrete is 16%, greenfield or grass is 23%, white gravel delivers 27% higher power generation, while white-painted concrete can contribute anywhere between 60% to 80% depending on the type and thickness of the paint. White roofing membrane however delivers the highest albedo value of over 80%.

Before selecting the bifacial solar panel, it is important to note what makes it a better option than its monofacial counterpart. It is also crucial to evaluate if the advantages outweigh the disadvantages enough to use bifacial panel over the existent option.

Some of the most important advantages of using bifacial solar panels are as follows:

Better Performance: Simply, it is the most important feature. Producing powers from both sides of the panel, there is an overall increase in energy generation of bifacial panels. Evidently, a bifacial solar panel can produce more electricity than a conventional solar panel. When the modules are mounted on a highly reflective surface, the extra power produced from the rear will, as some manufacturers claim, result in an increase in output by 30%.

Durability: Unlike the conventional monofacial panels, bifacial panels are frameless. They are covered on both sides by the tempered glass, and often more durable. The tempered glass is weather-resistant, UV resistant and can withstand high temperatures, strong winds, and harsh weather conditions.

Reduced Potential-induced Degradation (PID): PID happens when electrical currents stray from their intended path. As a result, they corrode the solar panels. Bifacial panels are frameless (without any metal). Hence, the solar cells are less likely to suffer from potential-induced degradation (PID). Furthermore, due to absence of any metal contacts on exterior, bifacial panels don’t require grounding.

Works Well in Diffused Light: One more advantage over the monofacial panels is that the bifacial panel works better in diffuse light as well. Thanks to extra surface area. This way, these panels are economic considering long-term costs.

Longer Warranties: Bifacial solar panels often come with a longer warranty of up to 30 years.

Disadvantages of A Bifacial Solar Panel

Some of the apparent disadvantages of using a bifacial solar panel are given below.

High Installation Costs: Since the bifacial solar panels are heavier than the conventional ones, their cost of installation increases naturally.

Bifacial solar PV technology can get a boost from solar tracking technology, capturing much more sunlight than a normal solar array ever could. As per one report ‘Global Techno-Economic Performance of Bifacial and Tracking Photovoltaic Systems’, tilting toward the light, for optimal sunlight collection from both sides, can be the most cost-effective solar option to date. The combination system enhances the energy production. It produces around 35 per cent more energy over usual, on average, than a single panel PV system. Overall, the arrangement helps to reduce cost of electricity by an average of 16 per cent, as per the report.