Countries That India Can Seek Inspiration From For Renewable Investments

India lost four ranks in the 59th edition of the Renewable Energy Country Attractiveness Index (RECAI). The South Asian Country was the seventh most attractive country for renewable energy investments, down from the third place it held earlier. In its 60th edition, India maintained its position. However, several other nations made steady progress on the rankings last year, becoming more attractive options for investors looking to invest their funds in the Renewable sector.

Ernst and Young’s semiannual report, RECAI, ranks the world’s top 40 markets on the attractiveness of their renewable energy investment and deployment opportunities. The rankings reflect the assessments of market attractiveness and global market trends. 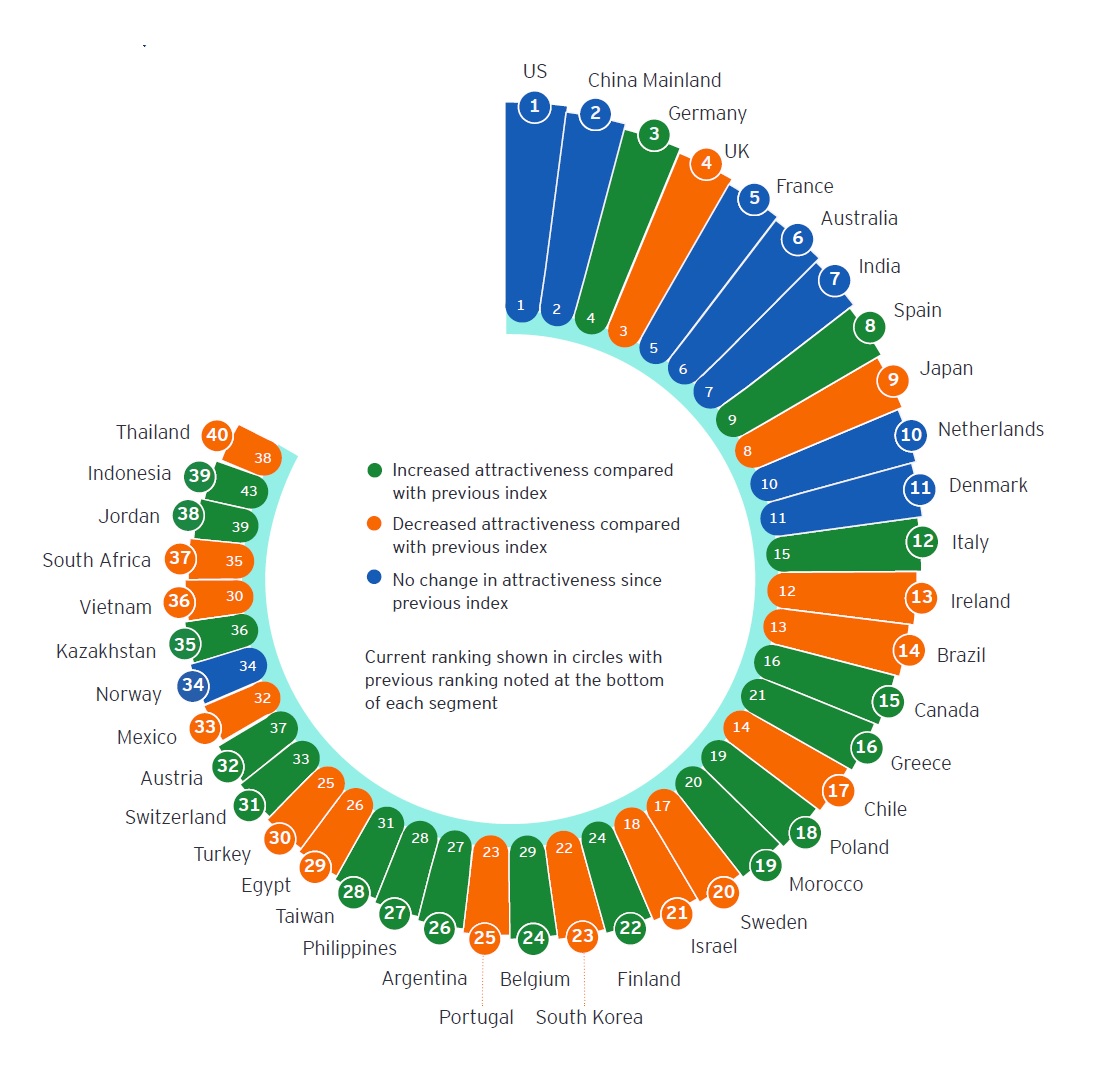 We look at some of the countries that became or remained the most attractive destinations for the renewable energy investments in the year which was adversely affected by the Ukraine-Russia war and the unstable post-pandemic global economic order.

The country’s renewable attractiveness saw a boost after the country passed new legislation in July 2022, targeting about 15 GW in new clean energy capacity to be built by 2030, a large portion of which is either now under construction or planned in Kozani, and for which it aims to attract EUR 10 billion in investment. One of the most notable provisions is the reduction of the average licensing time for renewables from 5 years to 14 months. The measures are in line with the country’s target of achieving the target of 25GW of non-hydropower renewable energy capacity by 2025.

Greece also passed its first offshore wind law, kickstarting its offshore wind program. Floating offshore wind farms are high on the agenda as the European nation aims to attain its target under the market’s National Energy and Climate Plan (NECP) to add at least 2GW of offshore wind by 2030.

Greece is attracting investors, thanks to its RE push. The peninsular country recently signed its first bilateral power purchase agreement with Axpo Group for a 100MW solar power project. The market also announced in July that private equity fund the Macquarie Green Investment Group’s Cero Generation will seek to add 1GW of renewable energy projects to its portfolio by 2025, and only for corporate PPAs.

Morocco ranks 19th globally in its renewable energy country attractiveness index (RECAI), behind larger economies such as the US, China, Germany, the UK, France, Australia, India, and Spain. Its low GDP (around $133 billion in 2021) has not contained the country’s renewable ambitions to develop large-scale renewables pipelines, as the country aims to serve domestic and foreign demand for clean energy.

While the country remains reliant on coal power plants and energy imports to meet its growing energy demands, Rabat plans to phase out coal by 2040 while increasing the share of renewable energy in its electricity mix to 52 per cent by 2030 and 80 per cent by 2050.

Morocco’s renewable energy supplies soared by almost 10 per cent compared to a year earlier, rising from 7.3TWh in 2020 to 7.9TWh in 2021. The country saw a renewable boost in the last two decades as it saw its renewable energy capacity crossing the 5GW mark in recent times, up from just around 1.2 GW in 2000. The country further aims to more than double this to reach 12 GW by as early as 2030 – over half of Morocco’s energy capacity.

Morocco was also ranked by the International Renewable Energy Agency in the top five globally for its potential to produce competitive green hydrogen. In 2021, its National Hydrogen Commission unveiled a roadmap on green hydrogen and launched the Green H2 cluster, a five-hectare research and development pilot platform, with a focus on producing green ammonia. This is expected to begin in late 2023 and produce four tonnes of green ammonia daily.

According to the roadmap, the national demand for the resource and its derivatives is expected to reach 4TWh in 2030 and require 2GW in renewable energy sources — half of the kingdom’s already installed capacity. Export demand over the same period is estimated at 10TWh mobilizing a total investment of $10 billion by 2030 and $75 billion by 2050.

Other than targeting renewable energy to produce electricity, Morocco is also looking at how to decarbonize other sectors. This has to include transport, which will require new fuels such as green hydrogen, and agriculture, which needs a combination of solar power, to substitute for diesel generators, and innovative fertilizers.

The Moroccan Renewable energy projects will be supported by foreign direct investment, through the institutional framework of the Moroccan Agency for Sustainable Energy (Masen). Masen will act as a “one-stop shop” for private project developers, bringing together permit processes, land acquisition and financing, and potentially providing a state guarantee for the investment.

Spain ranks among the top 10 investment attractive countries for renewable energy investments. The country is the largest recipient of direct grants – €69.5 billion (in current prices) – from the EU Recovery and Resilience Facility (RRF) over the period 2021-2026, and is implementing the record-breaking national recovery plan “España Puede”.

The plan focuses on accelerating the green and digital transition in Spain. It will focus on key areas in green transition – promote urban and long-distance sustainable mobility, increase the energy efficiency of buildings, decarbonising industry and reduce energy dependency, as well as deploy new technologies for green hydrogen and renewables.

A strong inflow of funds is crucial to the country that aims to double its share of renewable energy to 74% of power generation by 2030.

Spain is a colossal market in renewable energies with the 2nd largest installed wind capacity of over 28 GW in Europe – (the 5th largest globally). Offshore wind is the next step with the first offshore wind auction planned for 2023 and a target of 3GW by 2030.

The Hydrogen Roadmap, designed by the Spanish Government with an €8.9 billion investment, sets targets for 2030 of 4,000 MW of electrolyzer power, with 25% of industrial consumption, 5,000 to 7,000 light and heavy vehicles and two commercial train lines powered by renewable hydrogen, as well as 150 to 200 hydro generators for public use.

France is among the most attractive countries for renewable energy investments, closing the top 5 of the RECAI list, with a GDP-adjusted rank of 13. France has set ambitious 2050 renewables targets, with a short-term target of over 32 per cent renewables in the energy mix by 2030.

Despite being one of Europe’s top five largest renewable energy producers in 2021, France was not on track with its energy transition objectives recently. France’s share of renewable energies amounts to 19 per cent of the country’s gross final energy consumption, way below the 23 per cent target that Paris agreed to reach by 2020 under the EU’s renewable energy directive.

The country plans to establish 50 offshore plants by 2050 to generate 40GW of electricity – a part of obtaining 100GW of renewable power installed capacity by 2050, while also spending around €5bn ($5.3bn) for decarbonisation of its heavy industry.

Earlier this month, France moved ahead with Renewable Energy Acceleration Bill. The draft aims to facilitate administrative procedures by making them simpler to quicken projects and mobilise abandoned lands to augment installations. So far, the Bill has been seen in a positive light by industrialists who will be impacted by its passing. The bill is crucial for making France a favourite destination for investors to land their renewable energy investments.

Tags: Axpo Group, Cepsa, Ernst and Young, Moroccan Agency for Sustainable Energy, Recovery and Resilience Facility
"Want to be featured here or have news to share? Write to info[at]saurenergy.com