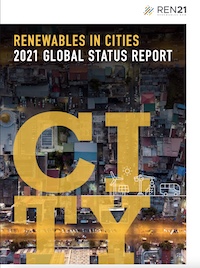 The latest Renewables in Cities 2021 Global Status Report shows that more than 1 billion people – about 25 percent of the urban population – live in a city with a renewable energy (RE) target and/or policy.

City governments around the world are increasingly using renewables to help fight energy poverty, reduce air pollution, tackle climate change, and improve public health and well-being. They have installed, purchased and contracted for renewable energy to meet the demand of their own buildings and vehicle fleets; adopted renewable energy targets and implemented policies to incentivize local renewable energy generation and consumption; and supported urban community energy projects; and facilitated co-operation among stakeholders.

Urban commitments to directly support renewables are increasing. In 2020 alone, more than 260 cities either set a new renewable energy target or passed a new policy. As of the end of the year, over 830 cities in 72 countries had adopted renewable energy targets. More than 600 cities worldwide having targets for 100% renewable energy. Cities have also taken action away from fossil fuels: by 2020, over 10,500 cities had adopted targets to reduce their greenhouse gas emissions and around 800 had committed to net-zero emissions. That’s an eight-fold increase on such commitments from 2019.