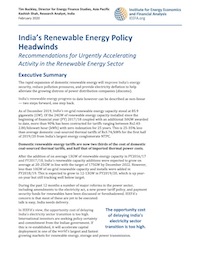 After the addition of on average 13GW of renewable energy capacity in FY2016/17 and FY2017/18, India’s renewable capacity additions were expected to grow on average at 20-25GW in line with the target of 175GW by December 2022. However, less than 10GW of on-grid renewable capacity and installs were added in FY2018/19. This is expected to grow to 12-13 GW in FY2019/20, which is up year-on-year but still tracking well below target. During the past 12 months, a number of major reforms in the power sector, including amendments to the electricity act, a new power tariff policy, and payment security funds for renewables have been discussed or foreshadowed. IEEFA’s concern is that most of these are yet to be executed: talk is easy, India needs delivery.

Further adding that policy certainty around renewable energy will increase domestic and international investment in India. “India could attract USD 500 to 700 billion in new investment by 2030 – the opportunity is huge,” said Co-Author of the report Tim Buckley. “To do this, India’s grid must be urgently expanded. The slow-down in transmission capacity is slowing India’s renewable energy ambition.”