CRISIL Report on The New Power Couple in Town 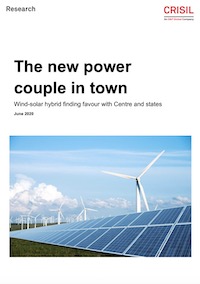 As the government continues to focus on increasing the share of renewable energy in the country, nearly 15,000 MW of wind-solar hybrid capacity is expected to come up over the next five years, a new report by CRISIL has revealed. Out of this 15,000 MW, works on nearly 10,000 MW are already either under construction or are being tendered and are expected to start feeding the grid by fiscal 2024.

As per the report, hybrid projects have found favour globally, too. Among others, China, Germany, Spain, Netherlands and the US have set up such projects to unlock value from hybrids. The advantages include lower capex costs, improved power integration and matching with the demand profile of the market.

The need for Hybrid Solar has been a natural evolution for the sector, as stand alone power from either of these sources has been replaced with a need for more flexible availability over a wider time period. The logic here being the availability of solar power in daylight , and wind more in the evenings and late night. However, even that is not a sureshot solution, as demonstrated by the focus on adding storage to the mix. In the US, China and now India, storage is lowly taking centrestage, and by early next year, it will be no surprise if a majority of projectshav a storage component to them. With some massive storage projects in the middle.

All of this is predicated on the hope, and trends that show storage costs falling steadily, to eventually reach level by 2025 that make power using renewable + storage easily cheaper than fossil, fuel options, especially coal.