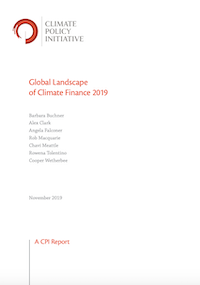 Four years after world leaders negotiated the Paris Climate Agreement, national policies and market signals are starting to reflect the urgency of increasing finance into areas of the economy that address climate change. However, a new study shows that while investment in climate action has been steadily increasing, it remains far short of the economy-wide transformation required. Climate Policy Initiative (CPI)’s Global Landscape of Climate Finance 2019 shows that global climate finance reached a record high of USD 612 billion in 2017, driven by renewable energy and lower-carbon transport capacity additions in China, the U.S., and India, as well as increased public commitments to land use and energy efficiency. This was followed by an 11% drop in 2018 to USD 546 billion attributed mostly to reduced public money for low-carbon transport and lower private investment in renewable energy.