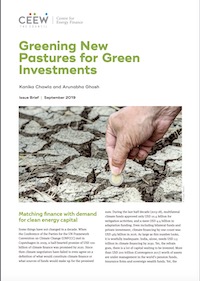 Large-scale mobilisation of green capital for investment and innovation in low-carbon energy solutions is the main holdout against a clean energy transition in emerging economies, according to an independent study released by the CEEW Centre for Energy Finance (CEEW-CEF).

More than USD 200 trillion worth of assets are under management in the world’s pension funds, insurance firms and sovereign wealth funds. Yet, the greatest challenge of our times – confronting climate change, especially in the most vulnerable countries – does not find enough suitors. India, alone, needs USD 2.5 trillion in climate financing by 2030.

Dr. Arunabha Ghosh, CEO, CEEW, said, “As of now, lower-middle and low-income countries, which account for 40% of the world’s population, get less than 15% of energy investment. This is because the cost of finance for renewable energy is extremely high for emerging economies and capital is not moving from capital-rich to capital-poor regions.”