A major new study by Castrol has revealed the ‘tipping points’ to achieve mainstream electric vehicle (EV) adoption in India.

A major new study released by Castrol draws on the views of consumers, fleet managers and automotive industry leaders from across India to reveal the factors driving EV buying decisions. The report ‘Accelerating the EVolution’ reveals that, on average for consumers in India, a price point of Rs 23,00,000 (or USD 31,000), a charge time of 35 minutes and a range of 401 kilometers (from a single charge) represent the ‘tipping points’ to achieve mainstream EV adoption.

The research also estimates that the annual EV market in India could be worth USD 2 billion by 2025 2 if all three tipping points are met, pointing to a possible EV-powered low-carbon recovery for the automotive industry. 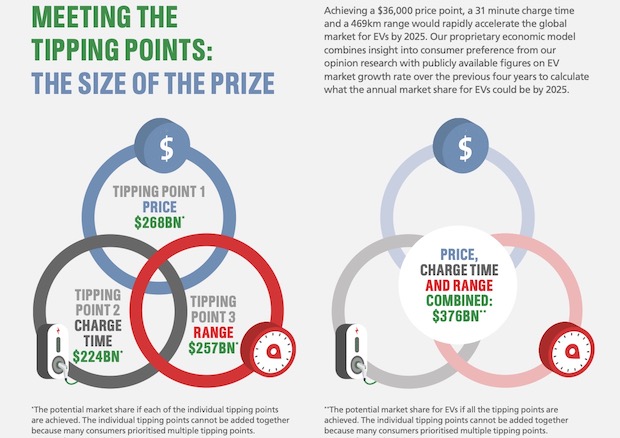 Sandeep Sangwan, managing director at Castrol India said “Castrol’s global research shows that consumers are positive about making the switch to electric; buyers in India are keen to do so earlier than those in other markets. Although consumers in India are seeking a lower price point than consumers in other countries, they are also willing to accept a slightly longer charge time and a slightly shorter range. These market-specific nuances are important; Accelerating the EVolution provides a clear roadmap for the industry to help support the transition to accelerate mainstream adoption of EVs in India and around the world.”

Based on research from eight of the world’s most important EV markets, Castrol’s study examines five critical challenges that should be addressed to promote further growth in the EV market – highlighting the differing priorities for consumers and fleet managers.

Key findings from the opinion research, which was conducted from December 2019 to January 2020, include:

Price is the number one priority for consumers in India with 67% of those surveyed saying that EVs are currently beyond their budget. The Rs23,00,000 (or USD 31,000) ‘tipping point’ for consumers in India is lower than the global average of Rs 27,00,000 (or USD 36,000). The study also finds that misconceptions about maintenance costs could be stopping consumers from making the switch: 83 percent of Indian consumers say that these costs were preventing them from buying a fully electric car. This suggests that many consumers are unaware that the overall average cost of ownership of an EV over its lifetime tends to be lower than an ICE vehicle.

Charge time was identified as the second most important challenge to the mainstream adoption of EVs, and consumers in India said they require an average charge time of 35 minutes before they would consider purchasing an EV. This is several minutes longer than the global average of 31 minutes. Nearly three quarters (72 percent) of those questioned believe EVs will only dominate on the roads once they can charge in a similar amount of time as it takes to refuel an internal combustion engine (ICE) vehicle.

Range was ranked third on the priority list, with 64 percent of Indian drivers agreeing it is a significant barrier to mainstream adoption of EVs. On average, they expect a range of 401 km (from a single charge), approximately equivalent to the distance between Ahmedabad and Indore. This is significantly lower than the global ‘tipping point’ range of 469 km. However, around a third of drivers in India said they mainly use their car for commuting or short journeys, so this suggests that ‘range anxiety’ may only be partly driving their preference.

Mandhir Singh, CEO at Castrol said “the automotive industry has already demonstrated what it can achieve in response to the coronavirus crisis, turning its capabilities to producing much needed medical equipment. With EV technology constantly improving, the challenge now will be to drive a low-carbon recovery and accelerate the EVolution as quickly as possible.

“Castrol has been working with the automotive industry to develop unique e-Fluid technology to support EVs, from battery coolant e-fluid, e-greases and transmission fluids. Bringing down the cost and charge time for electric vehicles while increasing range, infrastructure and vehicle choice will be critical to persuading consumers to make the switch to EVs.”