In Q4 2020, nearly one in six passenger cars registered in the European Union (EU) was an electrically-chargeable vehicle (16.5 percent).

In the fourth quarter (Q4) of 2020, nearly one in six passenger cars registered in the European Union (EU) was an electrically-chargeable vehicle (16.5 percent). Stimulus packages introduced by governments to boost demand, following the unprecedented impact of COVID-19 on car sales, sought to stimulate alternatively-powered vehicles in particular, further driving demand for low and zero-emission cars. 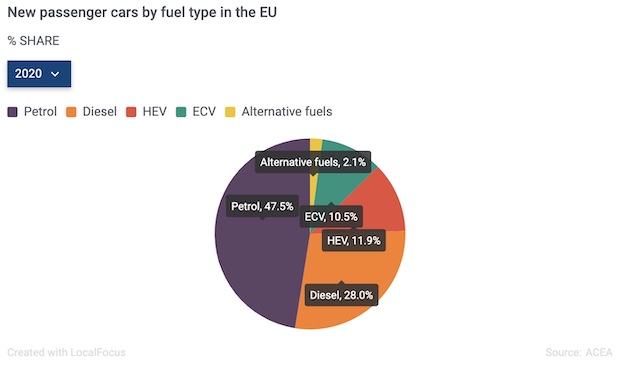 According to data released by the European Automobile Manufacturers Association (ACEA), overall in 2020, hybrid electric vehicles made up 11.9 percent of total passenger car sales across the EU, up from 5.7 percent in 2019. Electrically-chargeable vehicles saw a similar surge in demand last year, accounting for 10.5 percent of all new car registrations in the European Union, compared to a 3.0 percent market share the year before. Although the overall decline of 3 million units in car registrations as a result of COVID-19 hit diesel and petrol-powered vehicles the hardest, conventional fuel types still dominated EU car sales in terms of market share (75.5 percent) in 2020.

The data shows that for alternatively-powered vehicles, during Q4, registrations of electrically-chargeable vehicles (ECV) in the EU jumped from 130,992 units in 2019 to almost half a million (+262.8 percent), surpassing hybrid electric cars in sales volume for the first time. This strong increase in demand for battery electric vehicles (BEV) and plug-in hybrids (PHEV) – with registrations growing by 216.9 percent and 331.0 percent respectively – was largely driven by government stimuli for low and zero-emission vehicles. Indeed, some of the biggest gains were seen in countries with the most generous incentives. In Germany, for example, BEV registrations increased by over 500 percent in the last quarter of 2020.

Registrations of cars running on alternative fuels – ethanol (E85), liquid petroleum gas (LPG) and natural gas (NGV) – increased by 19.6% to 69,877 units in the EU during the fourth quarter.

All alternatively-powered vehicles (APV) combined represented 34.0 percent of the EU car market in the fourth quarter, with almost one million units registered in total (an increase of 143.9 percent compared to 2019). With the exception of Cyprus, APV registrations rose across the entire EU from October to December 2020. Looking at the biggest car markets, major gains were posted by Germany (+236.6 percent), France (+156.7 percent) and Italy (+108.9 percent); all boosted by exceptional growth in sales of battery-electric and plug-in hybrid cars at the end of the year.